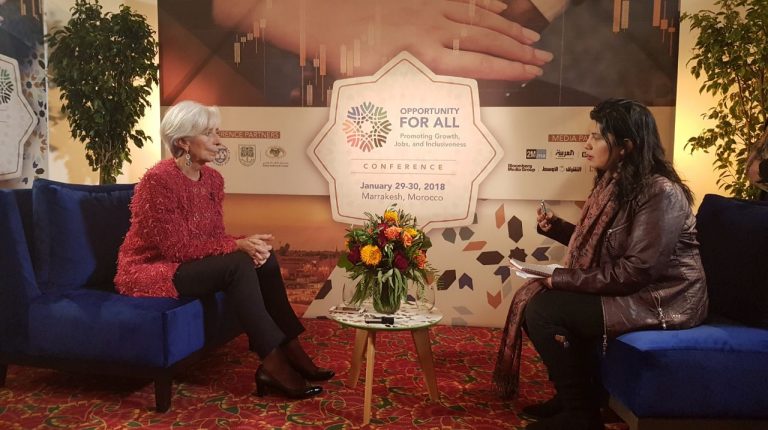 Marrakesh – In the wake of the ongoing economic reforms in Egypt, Daily News Egypt sat down with IMF Managing Director Christine Lagarde on the sidelines of the IMF’s Opportunity for All conference in Marrakesh. She discussed her insights and laid out what she views as the progress that has taken place and how these reforms can achieve the aspirations of the Egyptian people.

The first of two essential ways the Egyptian government can maximise the benefits of its economic reform programme, she said, is through job creation. The public sector is no lon- ger able to achieve this; only the private sector can create the needed jobs, she said.

She added that plenty of invest- ments await the Egyptian market and, considering the profitability of invest- ing in Egypt, current risk factors in the country have begun to show clear improvement.

“If you are an investor, you will find a stable macroeconomic framework, de- termination from all government bod- ies to reduce the deficit, and to avoid a subsidy regime that didn’t target the most needy, and that is an acceptable risk for any investor,” Lagarde said.

She added that more foreign direct investments (FDI) started to flow into Egypt, and that all economic indicators started to improve. “Growth is picking up in the country. Look at the whole Middle East and North Africa, the av- erage growth rate is about 3.5%, while Egypt has a growth rate of over 5%. This is clearly a sign of trust in the Egyp- tian economy and its determination to have macroeconomic stability going forward,” Lagarde said.

She emphasised the importance of taxation, calling it an important revenue tool for the government, adding that it is essential to develop a tax regime that includes all the economic classes and does not provide many tax cuts, in order to maximise revenues.

She added that all must pay their fair share of taxes, saying it is not right that only low-level employees and public workers are paying taxes. The tax re- gime should be incremental, fair, and divided across all classes, and more importantly, actually be collected, she emphasised.

When asked about the negative side effects of the reform programme, Lagarde said that the most important achievements of the economic reform programme are Egypt being serious about its future and wanting to have a sustainable regime rather than defend- ing an exchange rate that was “a bit of a delusion.”

She acknowledged that prices went up after the flotation, due to the fact that imports were higher than exports, so when the currency devaluated, prices increased, and inflation hit the people. However, she said, inflation is now going down, and will continue on a downward path, with the IMF project- ing it to be 12% in 2018.

These economic policies were needed, as the country was running out

of reserves and could no longer afford its trading with the rest of the world, she said, adding these policies are now beginning to work, but require patience because change is always difficult.

She explained that when some fuel subsidies were lifted, for example, prices went up. However, the Egyptian authori- ties were determined to put in place a social safety net and direct cash to those who needed it the most. Nearly 2 million families, or 8 million people, received those benefits, she said.

Lagarde added that if Egypt’s secu- rity, economic, and financial stability continued to improve, investors will continue to flock to Egypt.

With regard to the takeaways from the IMF conference on inclusive growth, Lagarde said the important one is that people have to listen to each other, talk to each other, and build together.

Over 27m young Arabs will enter labour market over next 5 years: Lagarde

IMF launches Opportunity for All in Morocco

The government is working to increase growth rates to reduce poverty

It is not true that the IMF demanded imposition of incremental taxes: Finance Minister