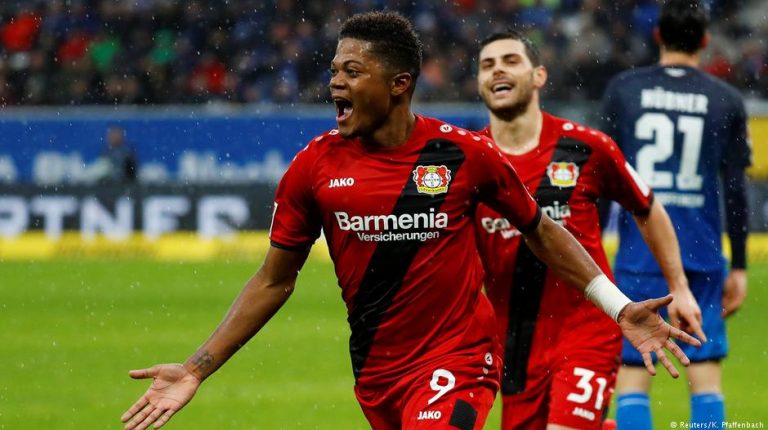 Matchday 19 might have been the turning point for the title race, as well as a number of clubs at the opposite end of the table fighting to survive. There were some great goals too.Everything you need to know about Matchday 19 in the Bundesliga.

– After declaring Bayern Munich as his future club and promising to give his all to get Schalke back into the Champions League, Leon Goretzka delivered a quiet performance in the 1-1 draw with Hannover. The reception was anything but quiet, though, as the midfielder heard disapproval in the form of whistles almost every time he touched the ball.

Read more: Goretzka to join Bayern in summer of 2018

– Leon Bailey might be having the best season of all players in the Bundesliga. He was involved in all but one of Leverkusen’s goals in the 4-1 win against Hoffenheim, including a jaw-dropping backheel goal he scored from 10 yards out.

– Leverkusen and Heiko Herrlich are proving all the doubters wrong this season. Considered uninspired when appointed, Herrlich has revamped Leverkusen and given them a real chance of returning to the promise land of the Champions League (in second at the end of Matchday 19). A demolition of Julian Nagelsmann’s Hoffenheim is a big moment for both the 46-year-old coach and the team.

Read more: A confident Müller is a good thing for Bayern Munich

– Simon Terodde is a new hero in Cologne. After a last-minute winner in the derby last weekend, the striker scored a brace against Hamburg to get Cologne’s third consecutive win on the board and drastically improve the hope of a great escape.

– RB Leipzig and their nightmare with set pieces continued on the weekend as they threw a one-goal lead to lose against Freiburg — and both goals came from corners. Stats vary a bit, but the club have conceded around the 13 mark from set-pieces this season. For all their talent and organization, they have a clear weakness.

– Sebastian Haller continues to make a strong case as bargain of the season. The 23-year-old striker cost just seven million euros last summer and since then he has scored 12 goals for Eintracht Frankfurt. He scored the opener against Wolfsburg and it was another superb strike.

– Just four points separate Leverkusen in second and Hannover in fourth. While that does show the Bundesliga to be unpredictable, it’s also a worrying trend as the perceived “chasing pack” struggles to distance itself from midtable and no one can keep pace with Bayern.

“I’d like to have continued. But I have to accept it.”
— Former HSV head coach Markus Gisdol after losing his job

“If I’m honest, I didn’t think it was possible for us to win the game.”
— Freiburg’s head coach Christian Streich after their surprising victory against RB Leipzig

“Maybe we should go to handball to see how they use their body.”
— RB Leipzig captain Willi Orban on the team’s set-piece weakness

“All the lights are on in the stadium. We don’t need any more light from you.”
— Mainz’s stadium announcer to the visiting Stuttgart fans who lit flares

“My pride is immeasurable today.”
— Mainz head coach Sandro Schwarz after the 3-2 win vs. Stuttgart

“19 points at home, one away. That’s incredible.”
— Stuttgart head coach Hannes Wolf after another away defeat

Perhaps it’s the wet weather, perhaps it’s the accessibility on television, perhaps it’s how average much of this Bundesliga season has been, but there were plenty of empty seats across the grounds in Germany on Matchday 19. It was a concerning sign for a league so proud of its attendance numbers. The hope is that a grey January is the reason, and nothing else.