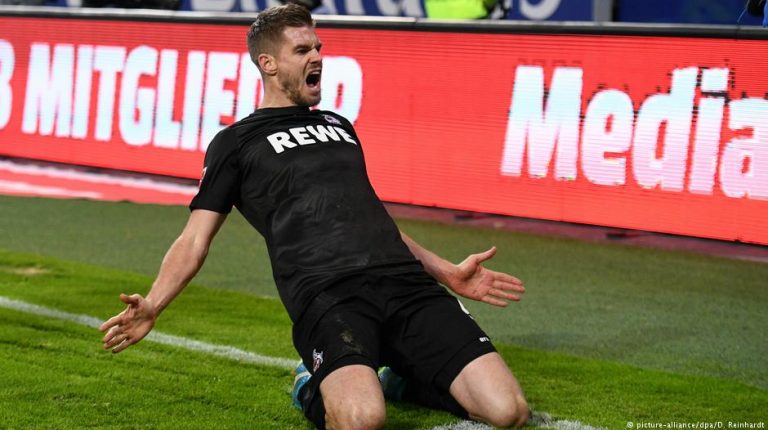 Three goals in two games from Simon Terodde have given bottom club Cologne a glimmer of hope. The striker is exactly what they need in a relegation battle, writes DW’s Matt Ford.If Simon Terodde wasn’t already a Cologne hero after his injury time derby winner against Borussia Mönchengladbach last week, the striker must now be in contention to become the city’s carnival king next month after his brace in Hamburg.

Two shots, two goals – that’s all the 29-year-old needed to secure Cologne three points which will feel like six. Not only did Terodde’s goals move ‘FC’ to within three points of Hamburg, they also demonstrated precisely what every side in a relegation battle needs: a clinical, instinctive, reliable goalscorer. In Terodde, Cologne appear to have found that.

Whether it was his striker’s instinct to gamble in the box and stab home Yuya Osako’s flick on in the first half, or his ice cold finish to double Cologne’s lead in the second, Terodde has taken just two games to restore a cool confidence to Cologne’s otherwise disorientated attack.

Nicolai Müller is probably the closest thing Hamburg have to a reliable goalscorer, but the 30-year-old was sat watching in the stands as he continues to recover from the cruciate ligament injury he suffered eight minutes into the opening day of the season. Without him, Hamburg began brightly, but mostly appeared frantic, out of control and unable to find a way past the outstanding Timo Horn.

It’s easier to keep the ball out of your own net than it is to put it in the opposition’s and, at the bottom of the Bundesliga in recent years, it has been those teams with a genuine goalscorer that tend to save themselves.

Ironically, Terodde’s arrival from Stuttgart during the winter break was interpreted by many as a sign that Cologne were already planning for a season in Germany’s second tier. After all, the 29-year-old scored 25 goals last season as Stuttgart were promoted as champions.

Clearly, Terodde and Cologne have other plans. Bouncing around the away end in the Volksparkstadion as full time approached, the 4,000 jubilant travelling supporters sang: “FC Köln are back again!”

Cologne haven’t saved themselves just yet but hope has been restored.