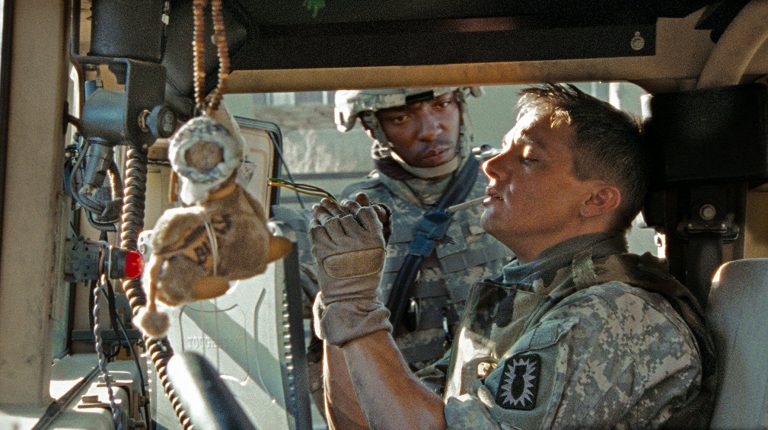 Having watched it for the second time yesterday, I am still as captivated as I was five years ago when I first watched it. The Hurt Locker, which is slang in the military for an emotional place of unfathomable pain, is the title given to Kathryn Bigelow’s 2010’s Oscar-winning film. The film follows a group of soldiers stationed in Iraq as part of the Explosive Ordinance Disposal (EOD) unit. The seemingly reckless adrenaline junkie, Sgt. Will James, played by Jeremy Renner, is the bread and butter of the film as he leads his team heedlessly through the missions. Despite his false bravado, James treats bombs with such meticulousness and precision, which forces one to look at him with an unwavering sense of awe. This feeling is heightened as Bigelow uses multiple vantage points to create a sense of paranoia, around James and his fellow comrades, that the bomb detonator could be anywhere and everywhere. By maintaining a sense of suspense in every scene, Bigelow manages to transform a war film into a thriller.

It is not only a tense environment due to the supposed terrorists that could be lurking at any corner, but Bigelow portrays the rising tensions between comrades through their differing philosophies on life and death. Although comedic banter does ensue, one occasionally gets glimpses of honest displays of emotion, such as those demonstrated by Sgt. Sanborn, played by Anthony Mackie, when admitting his gripping desires of wanting children. Or Specialist Eldrige’s denial and guilt of Colonel Cambridge’s death. But never do we get those scenes from Sgt. James; his internal turmoil is never expressed in words, because to him war is a game that he thrives on. The chaotic nature of war is comforting, giving way to the idea that some men are capable of loving war, especially when compared to the mundane life of chopping up mushrooms that they have left behind. His love or appreciation of solving these bomb puzzles borders on psychotic when we uncover that he keeps all the parts of bombs he stopped from detonating in a box underneath his bed, similar to a psychopath who keeps all the fingers of the victims he’s killed in a box. What gives this film its realistic stamp of approval is the intolerable heat, which intensified the characters’ struggles, because not only can one see how heavy their armour and equipment is but you can also hear it through their grunts and heavier paces. Due to it being filmed in the Middle East, their faces that were drenched with sweat and their soaked hair are all naturally reacting to actual 45-degree weather.

The most troubling aspect in the film is its overly simplified portrayals of Iraqis. Even though I am Arab, Bigelow was somehow able to convince me, an Arab—someone who considers the Iraq War the most reckless massacre in modern history—that the invading Americans are the good guys while the Iraqi victims are to blame. She does it so persuasively in a scene where an unsuspecting butcher detonates a bomb in seconds, killing Sgt. Mathew Thompson. Manufacturing paranoia through multiple vantage points criminalises everyone; you as a viewer are on high alert as are the Sergeants.  Innocent merchants, professors, and regular bystanders could be killed in an instant with no repercussions if an American soldier has the slightest inclination that Ahmed the grocer is using his cellphone to detonate a bomb rather than text his girlfriend. Bigelow uses another tactic to dehumanise Iraqis: presenting them with no back-stories, no present, or future, as opposed to the American sergeants. And the only one the audience sympathises with is Beckham, the fast-talking, English-speaking DVD seller who we end up despising for putting our main character on an emotional rollercoaster. I congratulate Bigelow for executing an aesthetic masterpiece but her portrayal of Iraqis dampens her success.

‘A good neighbour’: Istanbul Biennial on show in Munich