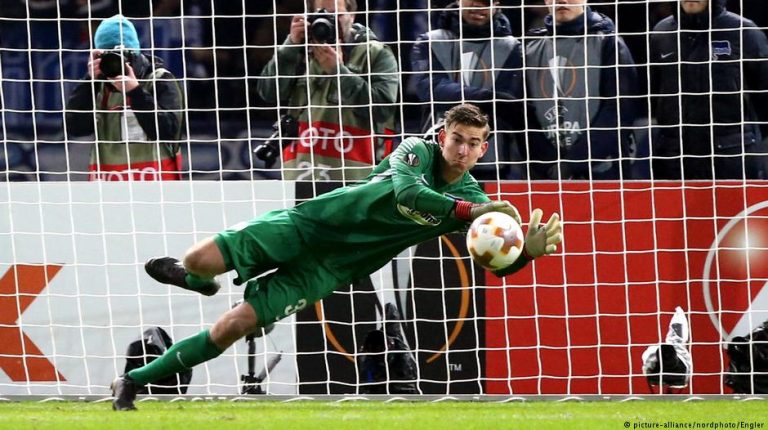 He’s got a lot to live up to but Jonathan Klinsmann has made an impressive start to his professional career. The son of Germany legend Jürgen Klinsmann saved a penalty in Hertha Berlin’s Europa League match on Thursday.For most of Hertha Berlin’s players, Thursday’s 1-1 draw with Ostersund in the Europa League was a pretty unremarkable dead rubber. But for their goalkeeper Jonathan Klinsmann it’ll live long in the memory.

The goalkeeping son of former Germany striker and coach Jürgen Klinsmann made his debut for the capital-city club after signing a first professional contract earlier in the year. After a quiet opening, he was beaten in the 59th minute before Hertha pulled one back soon afterwards.

But with three minutes remaining, the Swedish side were awarded a penalty. The 20-year-old dove low to his left to push Brwa Nouri’s spot kick away and draw comparisons with his father, who was known almost as much for his ability to go to ground as his eye for goal.

The youngster said the nerves he felt ahead of his first appearance did lead to an unusual prematch routine. “Before the match I took a short nap,” the younger Klinsmann admitted.

He also spoke of the “dream” scenario that saw fans chant his name and revealed the words of wisdom his father had given him prior to his first match in the professional ranks: “He advised me to just play my game.”

There was another, slightly less famous, footballing name on display on Thursday as Hertha coach Pal Dardai’s son Palko impressed in midfield.

But it was Klinsmann who was the subject of the media focus after the match. Dardai senior did his best to manage expectations.

“He did well,” the Hungarian coach said of his new keeper. “He also gathered experience with the under-21 team, not always without mistakes, but he has stepped it up in training. The fitness coach has been working with him. But we don’t need to turn it into the Klinsmann show. We can talk a lot about him when the time comes.”

Regular number one Rune Jarstein is expected to return when Hertha travel to Augsburg in the Bundesliga on Sunday.