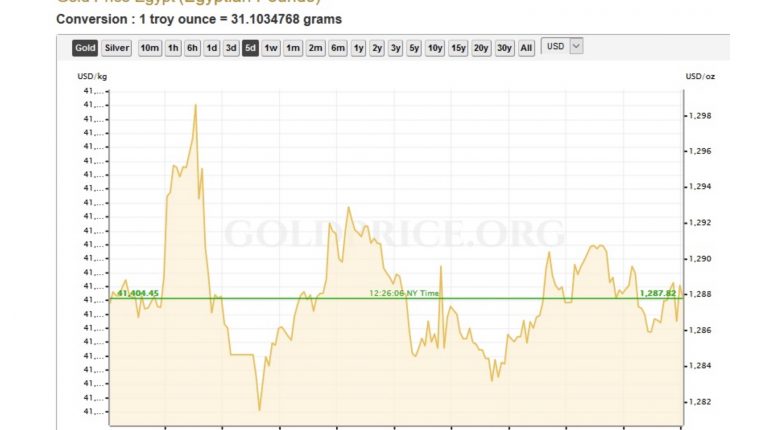 The price of gold is currently EGP 22,787.84 per troy ounce (August 24, 2017). The performance of the precious metal over 30 days is 2.14% higher, or EGP 478.30, up 13.90% over 6 months, or 2,790.67 EGP, and over the past year up 94.87%, or 11,133.16 EGP. Based on these positive statistics vis-à-vis the price of gold in Egyptian pounds, one would be remiss to think that gold demand was increasing in this Middle East country. The African continent remains a rich source of natural resources such as gold, diamonds, platinum, chromium, manganese, and vanadium, but economic activity is somewhat suppressed owing to its currency weakness across the continent.
Statistics from the World Gold Council (WGC) suggest that Middle East demand weakened markedly year-on-year by the end of 2016, particularly in Egypt where it reached a record low of 4.7 metric tonnes. Driving these reduced figures is weakness in the Egyptian pound. This has pushed up the local price of gold. The Egyptian central bank has been working hard to try and boost the pound by raising interest rates. However, the net effect of this has been a decline in demand for luxury items such as gold in the markets.

Gold trading activity in Saudi Arabia, Dubai, and other Middle Eastern countries has been picking up in recent weeks. The inclusion of a Sharia compliant gold contract is perceived as an exciting opportunity to entice institutional investors and new investors into the fold. This is the largest derivatives market in the Middle East, and it is likely to spur significant interest from vested parties.

How is gold performing globally?
During Q2 2017, global gold jewellery demand increased to 480.8 metric tonnes, up 8%. The World Gold Council (WGC) reported these comparatively strong figures in early August. While impressive, they pale in comparison to the quarterly average over the past 5 years, which stands at 586.2 metric tonnes.

During Q2 2017, gold demand increased by 5% from its 2016 lows. Of course, the big surprise was Egypt with 20% year-on-year declines in gold demand, dropping to just 4.7 metric tonnes.
The biggest improvements are evident in countries like Turkey and Iran. In Turkey, there was a 20% year-on-year increase, owing to a strengthening Turkish lira; and in Iran there was a 15% increase to 10.2 metric tonnes, owing to the incumbent’s massive victory in the presidential elections.

The current exchange rate of the US dollar (USD) versus the Egyptian Pound (EGP) is EGP 17.68/USD. In August 2016, the EGP was pegged at 8.88 to the USD, and it is now pegged at 17.68 to the USD. For gold investors in Egypt, the relatively more expensive USD (recall that gold is priced in USD) means that investors cannot afford to purchase as much gold per unit in EGP as before.

Deena Wagdy: a timeless declaration of strength adorned with pearls