A recent research note issued by BNP Paribas said that first goals of Egypt’s economy reform plan have been met, as the country prepares itself to another stage in 2018.

The report said that Egypt Macroeconomic imbalances are being reduced thanks to the pound flotation and some progress in fiscal reforms.

Nevertheless, households’ purchasing power is affected by a sharp rise in consumer prices, and the hike in interest rates is a threat for public finances.

After five years of sluggish growth and swelling fiscal and external deficits, the Egyptian economy has undergone major changes over the past two years.

According to the report, three factors have helped the economy return to brighter prospects. First, the decision to float the Egyptian pound lifted a major constraint on activity and foreign-currency liquidity, which had fallen to alarmingly low levels.

Second, major fiscal reforms were implemented with the support of international donor funds, checking the deterioration in public finances. Third, the accelerated development of natural gas resources is expected to trigger a significant reduction in the trade deficit and ensure the country’s energy supply.

But the report noted that these economic adjustments have been very costly, both for the local population, due to record-high price increases, and for debtors – and above all the state – due to higher interest rates.

“Although reforms have created positive momentum for correcting macroeconomic imbalances, the size of the adjustments could become a source of greater vulnerability,” the report said.

Floating the pound: a successful reform

In November 2016, the decision to float the Egyptian pound ended several months of tensions in the currency markets, which had fostered numerous restrictions on trade (blocking imports) and financial transactions (restricting international bank transactions), and encouraged the development of a parallel currency market.

The floating of the Egyptian pound (which has depreciated by 50%) coincided with a significant increase in domestic interest rates and a 3-year USD 5.4 billion loan from the International Monetary Fund. 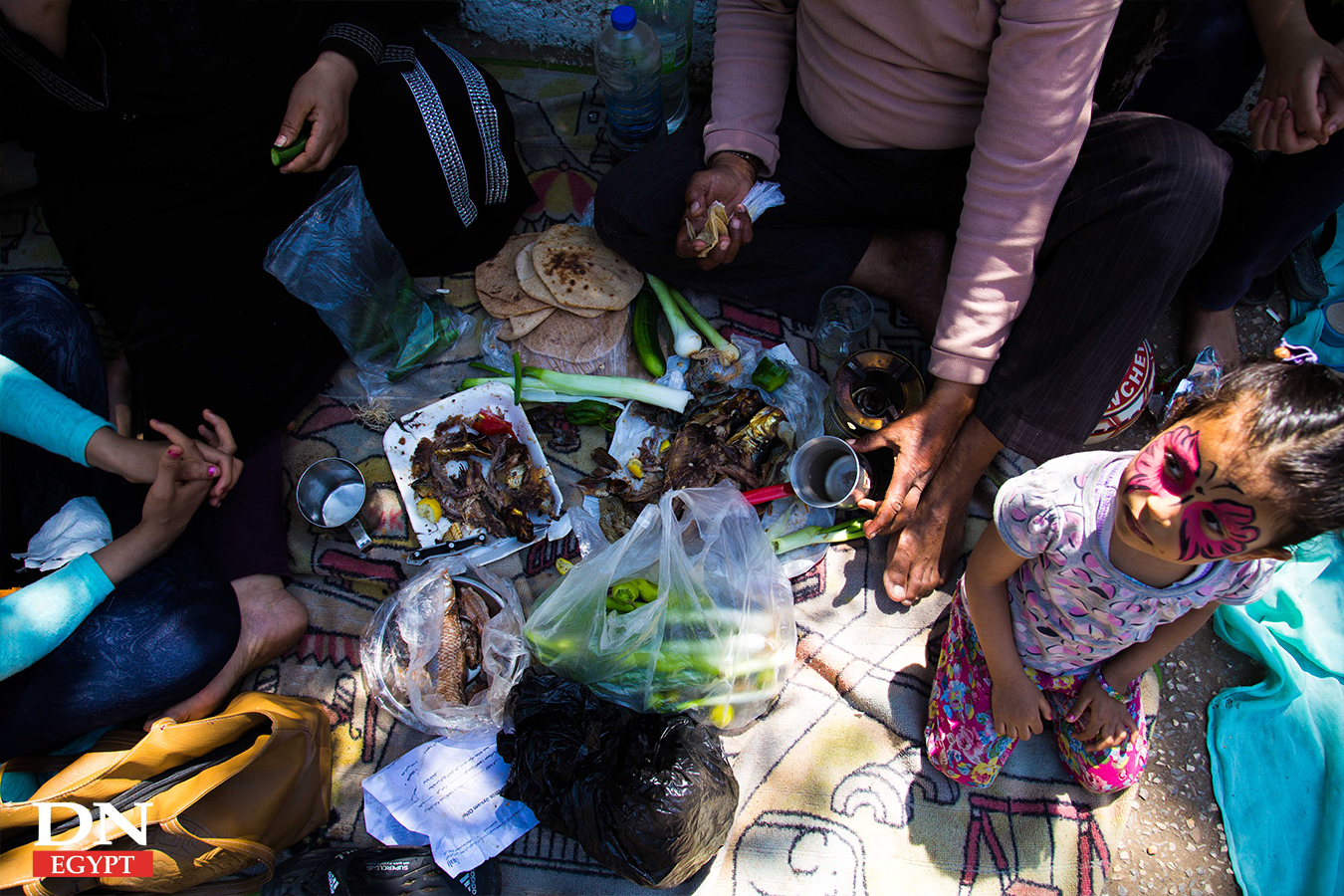 Floating the pound, international financial support, and the acceleration of public finance reforms restored confidence in the country’s economic policy and triggered a massive inflow of foreign currency into the banking system.

These included currency transfers previously outside of the official banking system, and foreign capital inflows.

Resident capital flows were estimated at more than USD 20 bn in the eight months since the pound was floated.

Non-resident capital inflows were also substantial, estimated at about USD 27 bn over the same period. In addition to the IMF’s USD 2.7 bn pay out as part of its Extended Fund Facility, there was also about USD 3 bn in support from other multilateral donor funds (World Bank), and USD 7 bn from two government bond issues on international markets.

Moreover, high yields on government bonds and renewed confidence in the currency market attracted about USD 10 bn in portfolio investment.

A little under USD 1 bn was invested in the Cairo stock exchange. Lastly, remittances have been sustained (USD 4.5-5 bn per quarter). All in all, about USD 57 bn has flowed into the Egyptian banking system since the decision to float the pound (equivalent to about 35% of M2 money supply at March 2017).

A direct consequence of this inflow of foreign currencies was a significant improvement in the Central Bank of Egypt’s foreign reserves. At the end of June 2017 1, CBE foreign reserves amounted to USD 31.3 bn, equivalent to 5.7 months of goods and services imports, compared to the alarming level of USD 15.5 bn, or only 2.9 months of imports, 11 months earlier.

Faced with a persistently high current account deficit and insufficient capital inflows, the banking system had to take on debt to cover part of the Egyptian market’s hard currency needs.

By May 2017, the net external position of the CBE and the commercial banks had swung back into positive territory, at about USD 2.3 bn and USD 0.9 bn, respectively.

Once foreign currency liquidity had returned to much more comfortable levels, the restrictions on currency transactions were gradually lifted.

Moreover, with the rebuilding of the CBE’s foreign reserves, the national oil company EGPC is in the process of repaying its arrears to international energy companies, which have been reduced to

Despite higher oil prices in H2 2016, the current account balance improved. Yet this improvement is mainly due to a surge in private transfers, due notably to the renewed confidence of non-resident

Egyptians in the domestic currency market.

These flows are expected to return to normal in the short term. For the moment, the pound’s

depreciation has not had a notable impact on the trade balance.

Although imports are declining due to higher costs, exports have not yet benefited from the improved competitiveness of the exchange rate. 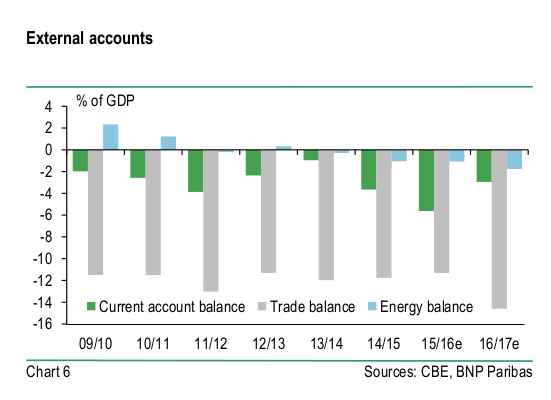 This deterioration is mainly due to the hard-to-curb and high current expenditures. In 2015/16, the public sector wage bill and subsidies (energy and food) amounted to 28% of fiscal revenues each, while debt service also absorbed about 30% of revenues.

Significant efforts have been made to clean up public finances since 2015/16. In keeping with the IMF support programme, these efforts were accelerated in 2016/17.

While debt service also absorbed about 30% of revenues. Significant efforts have been made to clean up public finances since 2015/16. In keeping with the IMF support programme, these efforts were accelerated in 2016/17.

The main measures include the introduction of a value-added tax, currently at 14% (which replaces the previous 10% tax on goods), and cut in energy subsidies.

Although these measures should help reduce the fiscal deficit in the medium term, their impact on the budget is limited for the moment.

The currency effect combined with higher oil prices in international markets has increased the energy bill, doubling the amount of energy subsidies relative to the initial budget proposal.

The amount of subsidies will continue to be extremely vulnerable to external factors, given the spread between consumer energy prices and market prices (currently estimated at 65%).

Moreover, the need to increase social measures to offset the impact of higher prices is another

In terms of revenues, however, the introduction of VAT as of Q2 2016/17 helped boost fiscal inflows, which increased by about 30%.

The increase in the total wage bill remained mild (+4%). The primary fiscal deficit has improved significantly in 2016/17. We estimate that narrowed by the equivalent of 1 point of GDP to 2.7% of GDP.

Public debt is expected to level off

Government debt has swollen to a high level (97% of GDP in 2015/16 according to the IMF). The majority is comprised of bonds issued on the domestic market with rather short maturities.

denominated in foreign currency, which currently accounts for about 15% of total debt.

The privatisation of some state-owned companies could further reduce the country’s debt.

The state-owned company Enppi is expected to float part of its capital in the short term. The government expects to raise USD 150 m, which would only have a marginal impact on public debt. 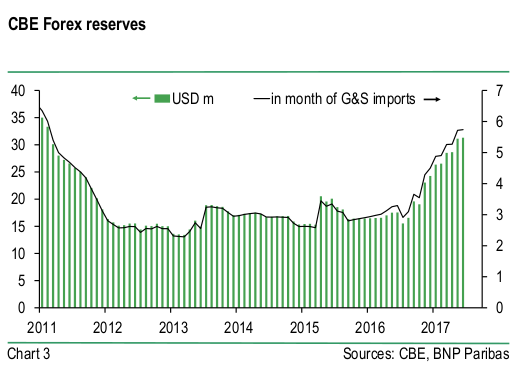 Recovery to be confirmed

Faced with an increasingly alarming macroeconomic situation, the Egyptian authorities have opted to launch massive, rapid reforms with the support of the international financial community. The first goals have been met: to restore the country’s foreign-currency liquidity and reverse the deterioration of public finances.

Yet other imbalances have emerged: in an economy with a low level of bank penetration, the massive increase in interest rates did not bring down inflation, but increased the cost of servicing the public debt.

During this transition year, there is a risk that too many incompatible reforms will be launched all at once. The key is to strike the right balance between monetary policy goals and fiscal reform targets. For the Egyptian economy, the way out of this delicate situation is to return to sustainable, diversified growth.

This can only be achieved through the combination of strong household consumption and accelerated productive investment.

We will consider amending rate of some tax transactions in current FY: El-Monayer