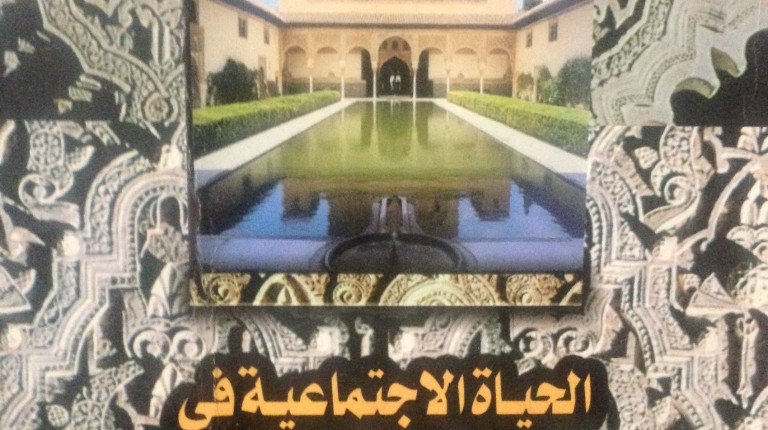 If you would like to live a fairytale in the Arab-Muslim Granada, you only have to include “Social life in Granada during Al-Ahmar’s era”.

The book is written by Emirati Ahmed Thani Al-Dousri, for which he achieved the PhD from the Moroccan University of Mohamed Al-Khames.

Granada was the last Islamic city in Andalusia, and thus it was where Arab and Muslims from the rest of Andalusia fled to after Christians were becoming stronger in the Iberian Peninsula.

Granada then became not only a defensive spot, but also a kingdom that spread civilization, especially when it was under the rule of Al-Ahmar, whose control started in the middle of the seventh Muslim century—the 13th century AD.

The book begins by introducing the reader to the geography of Granada and how it was established. In this part readers get a free tour through its climate, mountains, and rivers.

“There are many interpretations about the city’s name. Granada, which means in Spanish pomegranates, was named like this as pomegranates were encountered there in abundance; decorating its land.”

To make a full description of Granada, the author resorts to the early geographers’ and travelers’ descriptions about it.

One of the book’s deep sides is inserting a description of Granada in the form of poetry—an act that makes the reader to interact with the text in a romantic way.

A vital example is the description of the cold weather in Granada through Ebn Sadra’s poetry:

“On your land we were allowed to leave our prayers; and to drink alcohol, which is prohibited.

If God is driving me to hell; on a day like this, hell for me will be paradise.”

Granada at the time of Al-Ahmar was a great kingdom that accommodated three major states: Granada, Almeria, and Malaga.

Afterwards, there is an explanation for Granada’s administrative division.

The part following Granda’s geography and administrative illustration is a historical brief about how Al-Ahmar’s kingdom was established in Granada.

After the Almohad caliphate was demolished and Christians managed to take cities such as Valencia and Cordoba, Granada’s people feared they would be overtaken by Christians, so they contacted Mohamed Ibn Youssef Ibn Al-Ahmar, who obeyed their call and made Granada a headquarters for his kingdom.

He was followed by 21 kings, who were all good not only at defending Granada, but also at making developing it.

Granada was the last Arab-Muslim spot in Andalusia, so the Arab-Muslim existence was terminated in Andalusia when Granada’s 22nd and last king, Abu Abdallah Muhammad XII—known by the Castilians as Boabdil—handed the city to the Catholic Spanish rulers, Queen Isabella and King Ferdinand in the Muslim year 897, which corresponds to1492 AD—the year that Christopher Columbus set sail on his famous journey west.

The most famous sentence said on this occasion was by Boabdil’s mother, Aisha Al-Horra, who said to him, “Today cry like women for a monarchy that you could not defend as a man.”

The author then moves to the demographics of Granada at this time. The population included Arabs, who at the beginning of their occupation of Andalusia were a minority, but then quickly increased their numbers; Berbers, who played an important role in occupying Andalusia, as they formed the majority of the army presided over by Andalusia’s conquistador, Tarek Ibn Ziyad; Muladies, or Iberians who converted to Islam after the Arab-Muslim occupation; Mozarabs, the Iberian Christians living under the Moorish rule who learned Arabic and its literature, having a great role in transmitting the Arab-Islamic culture to the Christian kingdoms; and Jews were also aplenty.

They all lived and interacted together, while contributing to the economic, political, social, and cultural life of the kingdom.

The author himself is your tour guide for the architecture of Granada, which includes doors, streets, markets, housing, public baths, and religious buildings.

Not only according to the author, but also whoever visits Granada, the city is blessed by the Alhambra castle.

Alhambra, known in Arabic as Qalat Al-Hamra (The Red Citadel), was originally constructed in 889 AD as a small fortress. In the middle of the 13th century, Mohamed Ben Al-Ahmar rebuilt it, and after Isabella and Ferdinand took over Granada in 1492, they made it their royal court.

In addition to the harmony of its colors, Alhambra’s most attractive aspect is the phrase “No victor but Allah” inscribed on its glorious walls. Other religious phrases were also inscribed, but the most repeated one—more than hundred times—is the Bano Al-Ahmar, also known as the Nasrid motto—“No Victor but Allah”.

The religious phrases inscribed in Arabic on the walls were a decorative tradition in Muslim Spain. This could not only be seen in Alhambra, but also in Seville’s castle “Alcazar de Sevilla”, and Cordoba’s Mosque “la mezquita de Cordoba”.

While narrating pure historic actions, passionate readers do not get deep into the social details of a certain society or community. Thus, this book is your magic carpet to an integrated interaction with the empire of Granada under the rule of Bano Al-Ahmar. After his narration of the historical and geographical aspects, the author digs deeply to reflect on the social lifestyle of Granada’s inhabitants.

It has been mentioned in some books, and is also well-known, that the society inclined towards amusement and obscenity. However, this did not prevent them from defending their kingdom, even though the Christian enemy was a great challenge for them, causing them to be constantly vigilant.

Granada’s kings were aware that their existence was related to the existence of Islam. This is why we find kings, such as Ismail Ibn Farag, were very keen to apply Shari’a law. Ibn Farag strictly fought superstitions, as he was aware that this would distract people from their holy war.

When Granada’s people saw the lands that were under the Muslim domain start to fall under the Christian’s power, a strong inclination towards Sufism and asceticism appeared.

The author then moves on to describe how Granada’s people dressed. A bright side is his showing how women paid attention to their feminine side. They were beautifully dressed and let their hair grow long, indicating beauty. Elegantly designed jewelry was worn, as well as perfumes and cosmetics, extracted from lemons, flowers, and herbs.

Salt and soap were used to clean teeth, and it was common amongst men and women to dye their hair with henna.

Hygiene was of a great importance, as it is mentioned in the book that “a Granadan fellow could do without eating or drinking, but he could not bear not buying soap for his self-hygiene.”

The author does not escape describing footwear or how the people dressed at home and during funerals.

As Andalusia is a fertile land, its cuisine was very rich. Andalusia’s people preferred to cook rice with milk. Delicious fruits were abundant, and people used to eat various fruits and vegetables in abundant quantities, as their prices were cheap. Dried fruits were available throughout the whole year.

Even now, Spain is known for the best olives worldwide, where olives are known as a Spanish trademark. Spanish people even include olives in their breakfast, and when it comes to music, olives represent an inspirational theme for many artists in the Spanish folk music “flamenco”.

Being situated in a critical geographic position between Christian kingdoms like Castile, Aragon, and Portugal, made Granada always in a state of defense. This fact did not prevent its people from enjoying their lives and the picturesque nature of the land.

Life for Granada’s people was a continuous festival. Even now, tourists come from all over the world to celebrate the historic festivals of Andalusia and Granada.

Sports involved equestrian activities, fencing, hunting celebrations, and bullfighting—understandable means of entertainment for a kingdom that suffered a chain of wars and was always in a defensive position.

Equestrian activities were celebrated on many occasions where the audience enjoyed conflicts between animals or people fighting with animals. They used to take place on spacious lands, such as Plaza Bibramla, Paseo de Triunfo, and Plaza de los Aljibes.

There were ceremonies for fencing, whether individual or in teams, and they were celebrated as if the participants were fighting against each other in a real war, until the point that it was common for some of the participants to suffer injuries and cuts.

When the sultan hosted his guests—whether from Islamic or Christians kingdoms—there was a tradition of showing them a fencing exposition.

During Al-Ahmar’s kingdom, the bullfight was celebrated in two ways. The first took the form of a conflict between a lion and a bull, while the second was between a person and a bull.

As Granada is surrounded by mountains, hunting excursions became a way to celebrate festivals. Going on hunting excursions was one of the most enjoyable forms of entertainment for sultans. Sultan Mohamed the Fourth was famous for being a big fan of hunting and clever hunter.

How people celebrated religious and non-religious anniversaries is also described.

The author then brings the reader to witness how Andalusia’s people cared about general health. Public baths were established all over Andalusia, which now serve as a tourism attraction and are a great testimony on how Andalusia’s citizens cared about health and hygiene.

Al-Dousri then explains how Al-Ahmar’s Granada was split into social categories, which leads him to narrate the literature and economic movements of the kingdom.

The end is dedicated to Granada’s women: what they represented for men, their position in family relations, and their dynamic role in society.

There are examples of effective and dynamic women who served the society in various aspects, including Om El-Ezz Om Hozail in the field of reciting and teaching the Qur’an, and Om Al-Keram Bent Al-Motasem, the famous muwashshah poet and daughter of Almeria’s prince Al-Motasem Ibn Sumadeh.

However, the majority of the sources indicate that women did not acquire high positions in politics or administrative fields.

At the end of the book, as if in an old nostalgic movie, readers encounter photos of the Alhambra castle accompanied by samples of its architectural design.

After returning from this journey, it is no wonder that this PhD received the grade of “excellent” in 2002.

15th edition of Seville Festival will take place on 9 November

A Hundred and One Nights translated into German

In Tunisia, a home for musical dialogue