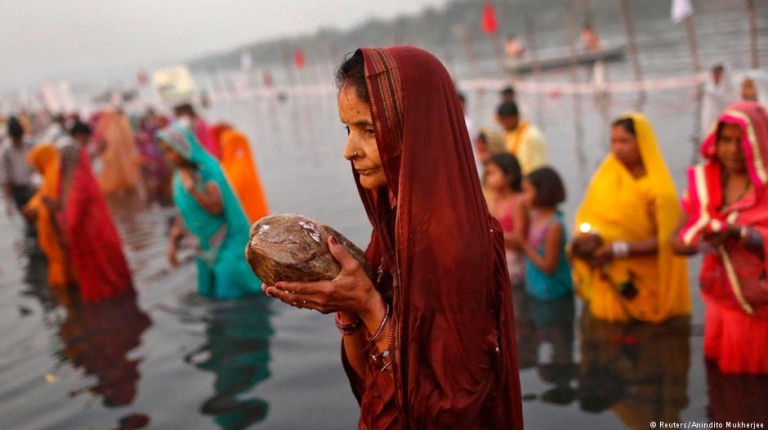 Join us as we take a look through the lens at some environmental events from around the world over the past week, including rights for two Indian rivers, a fish out of water and the crippling effects of drought.In India’s northern state of Uttarakhand, the high court declared the rivers Ganges and its main tributary, the Yamuna “living entities” granting them the same status and rights of a “legal person.” The judges said they had been moved to rule in favor of the bodies of water which they cited as being at risk of losing their very existence.

The Ganges, the longest river in India, is considered sacred by more than a billion Indians, who ritually bathe in it. But it is also extremely polluted, serving as the receptical for untreated sewage and industrial waste. The case was the result of complaints that the governments of Uttarakhand and Uttar Pradesh were not doing enough to protect the holy rivers.

In Thailand a sea turtle died following seven hours of surgery to remove almost a thousand coins, weighing a total of five kilos, from her stomach. Osmin, which translates to “Piggy Bank”, as the animal was called had ingested the coins that visitors routinely threw into the pond where she lived.

The case was covered in detail in Thailand, drawing attention to the conflict between luck-bringing traditions and animal welfare. Vets who treated the green turtle hope people will refrain from throwing money into ponds in which animals live.

Environmental organizations claim the chemical company, Monsanto, actively influenced studies on the risks and hazards of the pesticide active ingredient, glyphosate. In a report called “Glyphosate and cancer: Buying science” a citizen’s initiative alleges that a number of scientific studies used by EU and US regulators to determine health risks posed by the pesticide were tainted by a conflict of interests.

On the South Pacific island of Rarotonga, fish keen to escape the jaws of aquatic predators have evolved the ability to survive out of water. A new study by scientists at UNSW and the Australian National University, and published in The American Naturalist shows four species of blennies have independently emerged from the ocean to spend varying lengths of time on the rocky shoreline.

“It turns out the aquatic environment is a nasty place for blennies, full of enemies wanting to eat these small fish. But life is less hostile on the rocks, with birds their main worry,” said study first author Dr Terry Ord of UNSW Sydney.

As more than 70 people died in Peru’s worst flooding in 30 years, climatologist Mojib Latif tells DW that it could be considered as a coastal el Nino, but adds it is unusual to have two such events in quick succession. The last was in 2015/2016. Although el Ninos have become more frequent and stronger in recent decades, he says it’s too soon to say whether it is a trend, but adds “some climate models actually project that this is exactly what’s going to happen in response to climate change.”