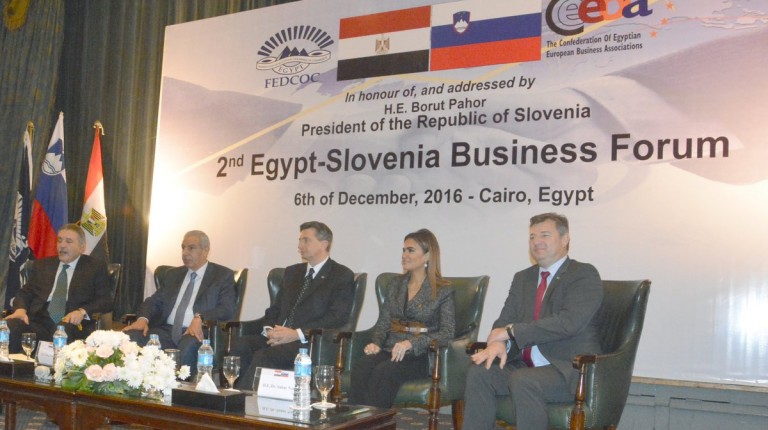 Three Egyptian companies signed cooperation agreements with their Slovenian counterpart in the sectors of energy, cables, and pharmaceuticals, according to a press statement from the Ministry of Industry and Trade on Tuesday.

The statement said that the three new cooperation agreements were signed between Iskra Company and Swedish Group, Robertina Sebjanic and Solera, and Radix Pharma and the Holding Company for Pharmaceuticals.

Minister of Industry and Trade Tarek Kabil said that the ministry seeks to increase the trade exchange between Egypt and Slovenia in the coming period, noting that the trade volume between both countries has registered €161m in 2015, with an increase of 12% compared to 2014.

The minister pointed out that Egyptian exports constitute 60% of the trade exchange volume.

During his participation in the Egyptian Slovenian Business Forum, which was attended by the president of the Republic of Slovenia, Kabil said that trade relations grew by 344% with Slovenia in the wake of signing the European Union Association Agreement in 2004.

The minister added that Egypt is considering political and economic reform policies to attract foreign investment.

Kabil invited Slovenian companies to invest in Egypt during the coming period.

For his part, president of the Slovenia Borut Pahor said that his current visit to Cairo represents the beginning of a new stage of bilateral cooperation between Egypt and Slovenia.

Pahor pointed out that there are great opportunities for the business communities on both sides to start new joint investment projects in the two countries.

The Aleksandrinke: Slovenians in Egypt