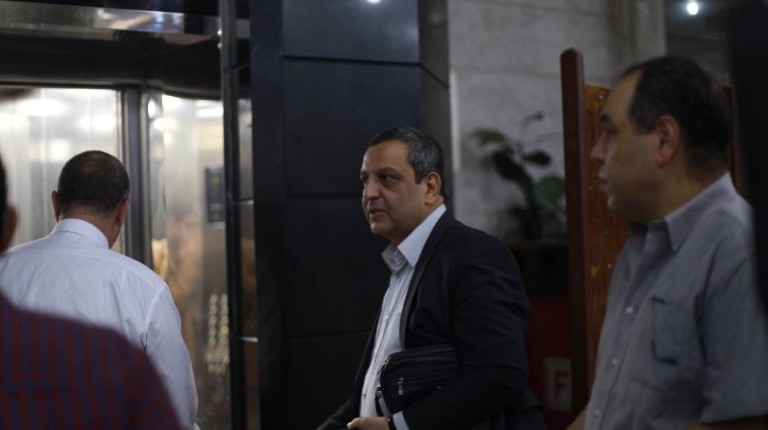 The Press Syndicate’s board of directors decided to appeal against a court verdict sentencing the syndicate president and two of his colleagues to prison. The decision came after an urgent meeting was held Saturday afternoon, shortly after the Qasr El-Nile Misdemeanours Court issued its verdict.

“The syndicate’s board and the press community were surprised, shocked, and irritated by the court verdict,” the syndicate said in a statement. It also announced it will hold regular emergency meetings, scheduling one for Tuesday and another open meeting on Wednesday.

The syndicate has called on journalists to mobilise for the cause.

The court sentenced the syndicate president Yehia Qalash, secretary general Gamal Abdul Reheem, and head of the Freedoms Committee Khaled El-Balshy to two years imprisonment for sheltering wanted suspects in the syndicate. Bail has also been set at EGP 10,000 for each defendant.

El-Balshy urged journalists not to be deterred by the verdict, adding that 28 journalists are currently behind bars.

Nearly 50 journalists staged a protest Saturday on the stairs of the syndicate. Protesters chanted against the Ministry of Interior and the oppressive behaviour of the regime. Meanwhile, the Press Syndicate said it “sees in the verdict a new round of the purposive crisis against the syndicate over the past six months, devoid of any legal or judicial basis”.

The syndicate added that the defendants’ prosecution is not individualistic, but is aimed at the institution as a whole.

“The syndicate has a deep-rooted history that extends over more than 75 years, and recently celebrated its diamond jubilee as the oldest Arab syndicate for journalists. It is one of the pillars of the Egyptian state,” the syndicate’s statement continued.

The syndicate has said it will continue to address issues facing journalists and press institutions, in particular new social and economic concerns that have arisen out of the recent wave of price hikes. El-Balshy held a meeting last week to shed light on this issue, following the flotation of the Egyptian pound on 3 November.

On Saturday, the Committee to Protect Journalists (CPJ) condemned the verdict. CPJ Middle East and North Africa Programme Coordinator Sherif Mansour said authorities are punishing the defendants “who represent the most influential voice for press freedom in Egypt, for working to protect journalists from harassment, threats, and arrests.”

“We call on Egyptian authorities to let the Press Syndicate and all members of the press do their jobs without fear of reprisal,” Mansour added.

The trial is believed to be linked to protests condemning the hotly contested Egyptian-Saudi maritime border agreement that asserted Saudi Arabian sovereignty of the Red Sea islands of Tiran and Sanafir.

Abdul Reheem had previously said in press statements that he was convinced they were being penalised over the Red Sea islands case.

“[Saturday’s verdict] against the leaders of the Press Syndicate was based on fabricated security reports which protected those who raised the Saudi flag in the face of those who defended their homeland,” commented Medhat E-Zahed, leader of the Socialist Popular Alliance Party (SPAP), in a press release on Saturday.

A large demonstration took place on 15 April on the stairs of the Press Syndicate. Both Qalash and El-Balshy led the chants against the state’s deal.

Although the protest was organised by different political factions, dozens of journalists were detained.

We prefer to be imprisoned rather than have the syndicate’s freedom violated: Qalash