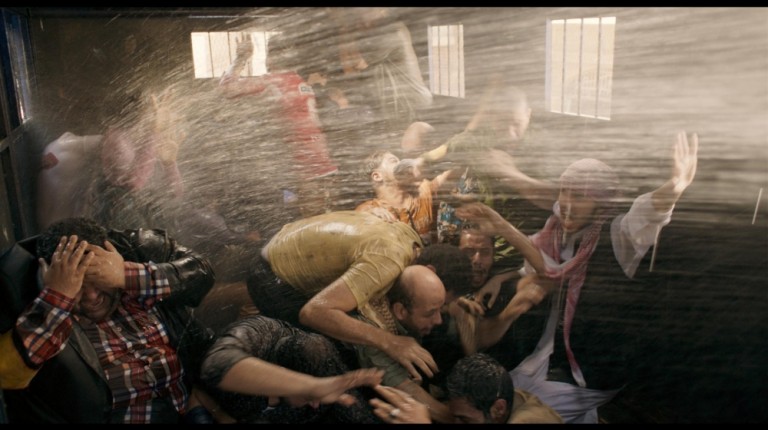 Over the past five years, many films have depicted the different dilemmas facing Egyptian society as it pushes through vast political changes, especially following the 25 January Revolution. However, few films have tackled the 30 June protests, which led to the ouster of Muslim Brotherhood president Mohamed Morsi.

Witnessing the riots that followed Morsi’s ouster from the eyes of a pro-Brotherhood group, from supporters of military rule, and from a journalist who just wanted live coverage of the protests—all locked in together in a police van—is the clash of perspectives that makes up writer Mohammed Diab’s latest film, Eshtebak.

Eshtebak [Clash] opened ‘Un Certain Regard’, a section of the festival’s official selection, at this year’s prestigious Cannes Film Festival. After the screening, the film sparked an impressive range of feedback from international outlets, newspapers and magazines as the “long anticipated follow-up to [Cairo 678]”—another movie in which Diab discusses sexual harassment, one of the most problematic issues facing Egyptian society.

The film’s events take place when protests hit Cairo after Morsi’s ouster in 2013. Brotherhood supporters protest against the military coup, while nearby another group celebrates the end of the Brotherhood’s rule. In between the two, Egyptian-American AP journalist Adam (Hany Adel) and his photographer Zein (Mohamed El Sebaey) were simply trying to do their job. They find themselves arrested and locked in a small police van waiting to be moved to the nearest police station. But due to the riots surrounding the van, they are all stuck inside together for a long time.

The film also stars Nelly Karim, who plays the role of a loyal nurse from a lower-class background. She entered the police van because she refused to let go of her husband and son.

“Sometimes a film makes history even before it is screened,” the Huffington Post said. “It marks the return of Egyptian cinema to ‘Un Certain Regard’ at Cannes Film Festival.”

In a letter to Variety magazine following the Paris attacks, Diab described his film as a way of allowing people to find their humanity: “The film unfolds inside a prisoner transport vehicle, carrying detainees from all walks of life—activists, Islamists and military supporters. In the course of a hellish day, they are forced to see one another beyond the stereotypes and discover each other’s humanity.”

“Diab’s craftsmanship is breathtaking” the Guardian wrote describing the dialogue as it moves tenderly and flawlessly through the plot.

In a review, Variety wrote about Diab’s distribution of roles: “Diab’s handling of the crowded interior is a notable achievement. The way he moves rioting mobs outside the wagon in a fury of relentless, mad movement seems to channel De Mille with its sweep and control.”

In an interview with the Huffington Post, Diab said his favourite aspect of his work is putting the viewer in the place of someone it is usually easy to criticise and insult. “In times of war, people see each other in black and white,” Diab said. “But film allows you to see the world through someone else’s eyes and, for the first time, you can pause and really analyse the world in a calm and fair way.”

“The final scene leaves us horrified, as it should. Diab’s small location results in a big impact,” the Guardian concluded.

The film has not yet been screened at cinemas in Egypt, but the great feedback so far has made its release highly anticipated. Especially as the film depicts a real-life incident when security forces shot a teargas canister into a vehicle full of detainees.

The detainees were arrested during the forced dispersal of the pro-Brotherhood sit-in at Rabaa Al-Adaweya on 14 August 2013. After being detained for three days, they were transported to Abu Zaabal Prison. The prisoners complained of inadequate ventilation and allegedly began creating a disturbance, prompting police officers to fire a teargas canister inside the vehicle. Of the 45 prisoners, only eight survived.

After the Academy Awards, ‘Eshtebak’ to represent Egypt at London Film Festival

‘Eshtebak’ to be released at Egyptian theatres by end of July

Everything you need to know about the 2016 Cannes Film Festival