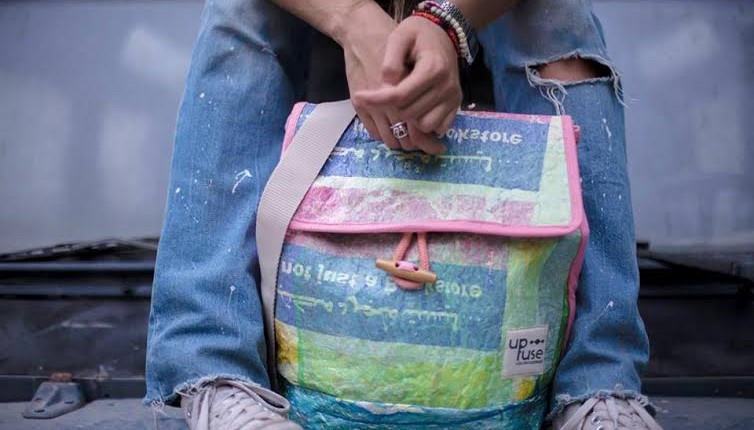 With 3D printing and fibre optics becoming a hot trend with fashion enthusiasts, many are trying to imagine the future of fashion. On the other hand, environment experts cannot seem to take a break from the usual argument on plastic waste, organic garbage, and recycling.

Up Fuse is an innovative local label that opens the door to a much-needed argument regarding ethical fashion and environmentally friendly garments. The brand offers a wide range of bags and wallets that, believe it or not, were ordinary plastic bags in a previous life.

“The concept actually started with the idea of upcycling plastic bags into fashionable accessories. In a more theoretical way, Up Fuse is about taking risk and changing it into opportunity,” said Yara Yassin, one of UP Fuse’s co-founders.

Unlike recycling, Upcycling aims to elevate waste and garbage to create products that are of a higher value or quality than the original plastic bag. In other words, Up Fuse does not only make use of garbage, it also manages to create valuable products out of the cheapest and most common material.

“Egypt has an incredible amount of plastic bags. Nowadays, everyone is suffering due to the unstable status of foreign currency and tariffs. Meanwhile, we feel absolutely lucky because our main raw material is simply everywhere,” said Yassin.

Like many other cosmopolitan cities around the world, Cairo suffers from a massive amount of plastic waste that does not only pollute the environment and occupy a large sector of waste dumps but also create a challenge for environmental researchers trying to conceive of new policies for waste management.

According the co-founders, Up Fuse initially started as a project about plastic consumption and its harmful effects on the environment. However, it was not long before the founders’ interests took a fashion and design detour.

“We both studied product design. Therefore, our main goal was to come up with a method to make plastic garbage look good, wearable and fashion-forward, ” said Rania Rafea, Up Fuse’s co-founder. “We love bags. Accordingly, we wanted to create them.”

Despite what may have been thought to be an endeavour hindered by gender barriers, the founders argued that it was not an issue.

“If you are not dealing with your surroundings with a gender-related stereotype, you will go through smoothly.  But, if you are going to stick to certain boundaries then you will certainly ruin it,” said Rafea.

Each and every product is initially created by the garbage collectors, who are in charge of creating the material. Afterwards, professional sewers create the bags.

With that said, according to the founders, the true challenge lays in turning this stiff material into bags and wallets as not all sewing machines can work with plastic. Furthermore, the upcycled sheets also demand a special design process.

“We mainly start by designing the general form then we work on each piece after receiving the upcycled sheets. Each design is created based on the available colours and patterns. We work together on pairing the material,” said Rafea.

Aside from the project’s environmental advantage, it also benefits a number of underprivileged individuals that work hand-in-hand with the founders.

“We have a studio, where Yara and I work on the designs. Then we have five to seven people that are in charge of the upcycling process. Meanwhile, we have three ladies that do the cleaning process: two sewers and one general supervisor,” said Rafea.

The founders were first introduced to the collectors through an NGO located in the area. Today, they are in direct contact with a local school that promotes progressive goals, including higher education and hygiene awareness

Ethical brands are currently witnessing a major rise around the globe as consumers are starting to show greater attention and support for environmental issues. According to the founders, local customers are also walking the same line.

“We started as a project more than two years ago then we officially launched Up Fuse, as a business, seven months ago. Surprisingly, the local feedback is way better than what we initially expected. Of course, it all depends on whom we target. We started with a certain audience that is already aware of environmental issues and recycling. Meanwhile, due to the vibrant colours and patterns, young people truly like the products and support the concept,” said Rafea.

For their Spring and Summer 2016 launch, the ladies behind Up Fuse decided to connect the dots between environmental ethics and high fashion and host a special night showcasing artisans, materials and designing processes. The event was organised under the umbrella the international NGO Fashion Revolution, which aims to raise awareness about textile sourcing.

“We support ethical fashion. We care about the people as well as the environment. We have already been in contact with Fashion Revolution and every year they hold an international week where they organise awareness campaigns regarding the origins of clothes and the people behind the industry,” said Rafea.

The founders aim to create a local network of customers, producers, designers and fashion experts and work on expanding it each year in parallel with the international week. The event included few talks by designers Amina Khalil and Deana Shabaan as well as buyer Ines Gohar.

Underground bands tell the stories of their nations