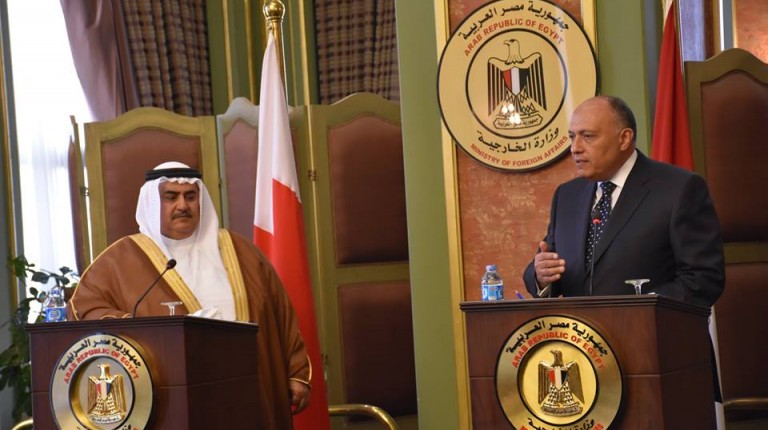 Egypt supports the unity and stability of the Kingdom of Bahrain, Minister of Foreign Affairs Sameh Shoukry said on Tuesday.

Egypt stands against any attempt to interfere in Bahrain’s internal affairs, Shoukry said during a joint press conference with his Bahraini counterpart, Khaled bin Ahmed Al-Khalifa.

Bahrain has accused Iran of fuelling unrest and aiding Shi’a extremists who have been involved in attacks on the Bahraini police force. Iran has denounced these accusations.

When asked about relations with Iran, Shoukry said they remain cold.

“We call on Iran to change its policy towards the Gulf, in particular towards Bahrain, and to stop interfering in the internal situations of Arab countries,” Shoukry said at the press conference.

Iran is important in global politics and relations between Iran and the Arabs are historic, Shoukry said. He added, however, that Egypt will stand against any policies that affect Arab countries’ national security.

The Bahraini foreign minister asked Iran to change its policy towards the Gulf and to cease its attempts to dominate the region.

“Iran is our neighbour but we have problems in our relations to one another,” said Al-Khalifa.

Bahrain severed its diplomatic relations with Iran after Saudi Arabia severed ties, due to attacks on the Saudi embassy in Tehran following the execution of prominent Shi’a cleric Nimr Al- Nimr.

When asked about the role of Arab diplomacy in solving the Arab-Israeli conflict, Al-Khalifa said the Arab proposal has always been “land for peace”. Iranian “threats” are more dangerous than those of the Israeli’s as the nation “covers itself with a religion mantel”, the Bahraini minister said.

According to Al-Khalifa, terrorism has been exaggerated in the region as an attempt to weaken nation-states in the Middle East.

Regarding bilateral relations between Egypt and Bahrain, Shoukry and Al-Khalifa will head a joint committee that will sign 15 agreements to enforce bilateral cooperation in several fields, including agriculture, health, and tourism.

The Bahraini King Hamad bin Khalifa will arrive in Cairo on Tuesday. He is scheduled to hold a meeting with the Egyptian president.