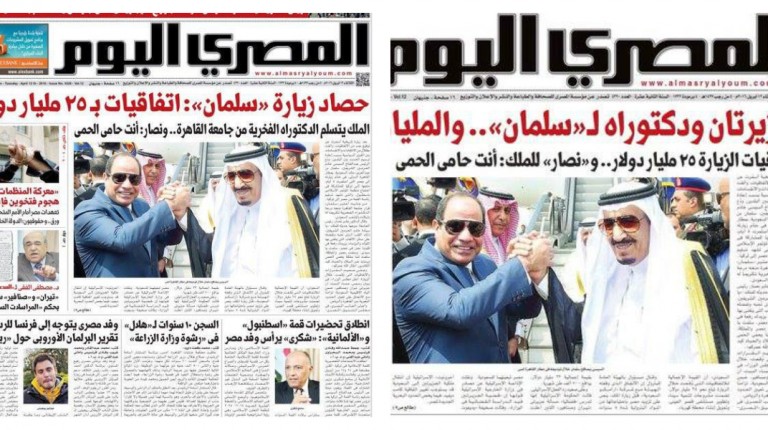 When it went to print on Monday night, the original front page headline read: “Two islands and a PhD to Salman… and billions to Egypt”.

The newspaper, which is printed at the state-run Al-Ahram printing house and another privately-owned printing house, was retracted so that the headline could be changed, based on a request by its editor-in-chief Mohamed Saleh, according to Al-Masry Al-Youm journalists who spoke to Daily News Egypt on condition of anonymity.

The Al-Masry A-Youm headline, the most widely circulated privately-owned newspaper in Egypt, was subsequently changed to “Salman visit’s toll: agreements worth $25bn”.

According to journalists and editorial staff, Saleh allegedly changed the headline following comments from state agencies over its critical stance.

This marks the first major case of reported press censorship in 2016. The past year has seen a surge in restrictions of press freedoms, which are protected by the Egyptian Constitution. In August 2015, three newspapers were censored in less than two weeks.

The Egyptian Constitution and laws prohibit press censorship. However, in a recent review of legislation on the issue by the Association for Freedom of Thought and Expression (AFTE), it was reported that constitutional articles and legislation are largely suspended and violated by “unnamed security authorities”.