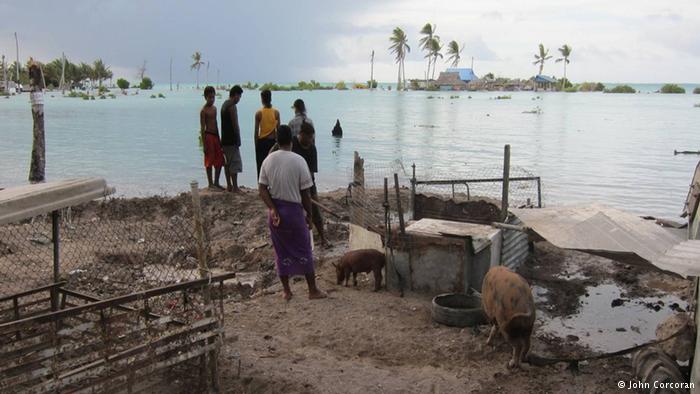 As Germany grapples with an ongoing refugee crisis, delegates from around the world are also meeting in Bonn to negotiate a new climate treaty. A climate refugee advocate, Scott Leckie, talked to DW about future perspectives.

In Europe we’re seeing the arrival of hundreds of thousands of refugees, mostly from war-torn countries. Some are calling it a “migration crisis”, but is this the new normal? Is this the kind of mass migration that climate change could cause?

Well, we hope that’s not the new normal and we believe, through what we’ve done in 15 or 20 different countries, that most people who will leave their homes because of climate change will aim initially to stay within the borders of their own country. Only in the most dramatic cases will people actually try to flee across borders.

How many people globally are in danger of having to leave their homes because of climate change-related problems, like rising sea levels or droughts?

No one knows for certain how many people will ultimately be displaced, but the most common numbers that come up in discussions and debates on this topic are anywhere between 150 to 250 million people over the next several decades. It all depends, of course, on how much the sea level rises and how much the weather actually changes. But in the meantime, it’s important to point out that we’re not talking only about the future here. Many millions of people have already left their homes in many countries across the world, whether that’s Panama, Kiribati in the Pacific, the Solomon Islands, Bangladesh, the Maldives, the state of Alaska in the United States, and many other places. It’s really a contemporary issue, and one that people are working on already.

Legally, why is the idea of a “climate refugee” so controversial?

The United Nations, when it came up with the Refugee Convention following World War II, gave a very specific definition of what a refugee was. And that was somebody feeling prosecution on various grounds from their own government. And if you are displaced because of environmental factors that your own government did not cause, you are not technically a refugee. So that’s one of the issues that makes it difficult to use the Refugee Convention as the basis for an asylum claim. Having said that, cases are now appearing in countries, such as New Zealand, that are essentially arguing that people cannot go back home because it would be too dangerous to their lives and livelihoods. They haven’t really been successful yet in that regard, but they are getting closer and closer.

Are we likely to see many more such cases?

There will be a series of cases in a growing number of countries, as time goes on, and there are many grounds which one could use to justify why one should be allowed to stay within a particular country if their own government fails to protect them. If one is living along a coastline, and one’s government does nothing whatsoever to protect them against rising sea levels or the inundation of their lands, has no policy in place, no laws in place, and has no programme in place to assist them to find a place where they can begin life anew, then you start coming up with human rights arguments, refugee arguments and a range of other arguments that could be used in a court. At the same time, it’s important to remember that’s not going to be the way to solve climate displacement, on an ad hoc or case-by-case basis. It really needs to come from political, legal and policy levels – and if we do that in the world’s most affected countries, a lot of those cases will not be necessary.

So what must be done?

What we found, weather it’s in rural areas in Bangladesh, along coast lines in Tuvalu, in Alaska, or indigenous territories in Panama, is that people are already starting to understand that in order to survive for many coastal communities in particular, they need new pieces of land in safer locations. What’s happening in these countries and many others is that people are beginning to put together their own relocation programmes. These are community-driven, people’s processes, usually with the support of the government. Ultimately, that process needs to be replicated en masse and at much larger scale.

What should individual states and the international community be doing to better handle the issue of climate displacement?

We need to remember that most displacement will happen internally. But many governments where that is occurring do not have the resources to resolve the problem. So individual states need to be supported by wealthier countries with resources, expertise, technological assistance and so on to help them solve their problem domestically. What really has to happen is a change in policy at the domestic level in all these countries. It’s the same thing with refugees generally: it’s good to have a refugee convention and a whole process that allows people to make asylum claims, of course, but far more important is making sure that governments don’t do the sorts of things that create refugees in the first place.

What hope does the UN climate change summit in Paris in December offer current and future climate-displaced people?

When the United Nations framework convention on climate change was signed many years ago, there was no mention or even thought about the whole issue of climate displacement. There is nothing in the original text of the Kyoto protocol that addresses this issue. So we’re very happy to see in the draft text – which is being negotiated now – references the question of climate displacement. There are even proposals to develop an international climate displacement mechanism that people could use to find viable solutions to their displacement. There is no guarantee of course that this will make it through into the final version of the text – it’s still a controversial issue for many governments. At the very least, we can hope for global agreements that will help keep temperatures under 2°C, and obviously significantly reduce the amount of CO2 put into the atmosphere.

Scott Leckie is founder and director of Displacement Solutions, a non-governmental organisation that strategises to prevent people around the world being forced to flee their homes as a result of climate change.

The interview was conducted by Charlotta Lomas. It has been edited and condensed for clarity.