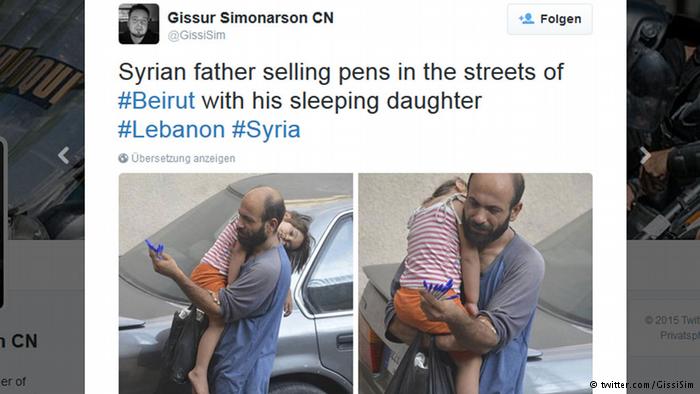 A crowdfunding campaign sparked by the sight of Syrian refugee and single father Abdul Halim Atar selling pens to make money for his daughters has changed the family’s life. A consultant in Norway made it happen.

The Syrian refugee Abdul Halim Atar was selling pens in the streets of Beirut when he was photographed one day, carrying his sleeping daughter on his shoulders. That picture landed on Twitter, and then something incredible happened.

The image has a heartbreaking effect. Abdul Halim Atar, visibly exhausted on a crowded street in the Lebanese capital, selling his blue pens. This was his daily routine, and he would take his four-year-old daughter along with him. When this picture was taken, Reem had fallen asleep, her head resting on her father’s shoulder. It’s not known who took the photograph, but whoever did, posted it on Twitter. It was shared thousands of times.

Gissur Simonarson, from Iceland of all places, was one of the people moved by it, and this was the moment that Abdul Halim Atar’s life would be changed. Simonarson sought to track down the pen salesman, in the hopes of helping him with a crowd-funding campaign. “Let’s find him and buy his pens,” the Icelander tweeted under the hashtag #buypens.

All it took was a few days. “Somebody came up to me and said they were happy to see me,” Abdul Halim Atar said in an interview with Sky News Arabia, his first ever appearance on television. “He told me that the whole online world was looking for me. I didn’t even know what he was talking about. At first, I was even a little scared.”

Simonarson, who works as a consultant in Oslo, was able to reach Atar via telephone. “Somebody gave Abdul Halim a telephone, and we were able to talk,” he has said, in a range of media interviews since.

The connection was arranged with help from the non-governmental organisation “Lebanese 4 Refugees”, and it was the activist Carol Malouf who eventually met up with Abdul Halim.

The crowd-funding campaign that ensued blew away all expectations. Within four days, people from 89 countries had pledged over $155,000 (€138,000), and the campaign is set to continue for the next 10 days. “I still cannot fathom how much happiness this gave me,” Atar said in response to the deluge of support.

Happiness isn’t exactly something the 35-year-old Palestinian Syrian had been given often in his life. He worked for a while in a chocolate factory in Damascus. When the insurgency began in Syria that resulted in devastating civil war, Atar left the then-Palestinian camp Yarmouk near Damascus with his family. Atar left the Palestinian camp Yarmouk near Damascus with his wife and their two children, Reem and her brother Aboud.

The reason they left the camp was that Palestinians in Syria had been wedged between two fronts. On the one hand, they were seen as supporting President Bashar Aal-Assad, while others accused them of belonging to the insurgent opposition. Today, Yarmouk camp is inhabited by all parties fighting in the Syrian war.

At first, Atar and his family spent eight months in Egypt, but his wife insisted on returning to Syria. “This ripped us apart. I didn’t see any future then for my children in Syria,” he explains. Thus, he decided to take his children to Lebanon.

This was three years ago. Ever since, Atar has lived with his children in Jnah, on the outskirts of Beirut, in two rooms. “At least we have a roof over our heads,” he says. Until now, he has received $40 per month from a relief organisation to get by.

For Palestinian refugees, a special organisation was founded in 1949, the UN Relief and Works Agency for Palestine Refugees in the Near East (UNRWA); however, this organisation is chronically underfunded, because it is dependent on voluntary contributions from various international donors.

Atar has attempted to earn the money he needs to provide for his family by selling pens on the street. “Everybody needs something to write with,” he says.

The overwhelming response to the crowd-funding campaign has not only been positive, however. Jealousy and criticism have been expressed as well, especially with regard to the immense donations given to one single family. The money should be distributed equally, many users have written.

But with that said, James Denselow, Middle East expert and director of the London-based New Diplomacy Platform, sees this instance of solidarity positively, calling for more such stories to be told and spread. Human beings are much more willing to donate when the fates of those in need are brought before their eyes, Denselow argues.

Carol Malouf, of “Lebanese 4 Refugees”, is working on setting up a fund that will secure a monthly sum for Atar. She is also attempting to find safer housing for the family, and a place in school for the nine-year-old Aboud.

Abdul Halim Atar says he definitely wants to provide education for his children. “They should live well,” he says. But he also wants to help others with the money pledged. “There are over 1,500 kids working on the streets of Beirut. It’s my wish for this to change.”

His most genuine wish is to return with his family to Syria one day. But for right now, all he can call that is a dream.