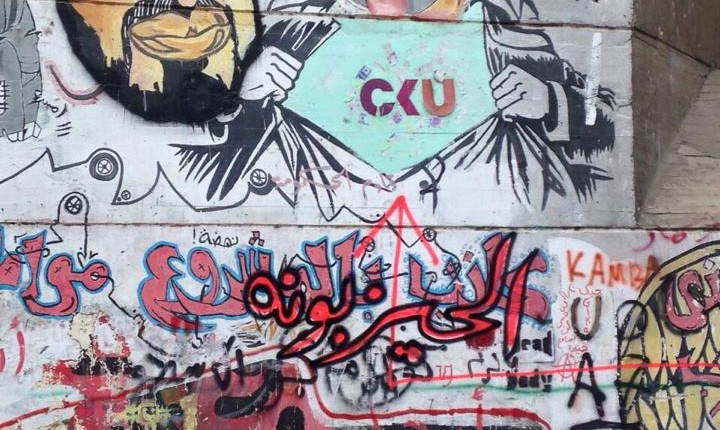 A cherished wall of street-art bearing the chants and faces of Egypt’s uprising is being painted over in Downtown Cairo’s Mohamed Mahmoud Street.

Thrown up chaotically in the times after the 25 January Revolution, the graffiti of Egypt’s streets became internationally recognised as a striking example of a popular movement thriving with acerbic, creative liberation. The streets’ walls became a notice-board upon which the heroes and villains of the revolution were caricatured, and which commemorated the dead. Among them is young activist Gika, shot dead in a 2012 street clash with security forces, and the 74 Port Said martyrs of Al-Ahly’s Ultras fan group.

But as the momentum of collective action and protest was extinguished in recent times, so too did the work of the graffitists. The remaining work has become as much as an epitaph to the revolution’s death, as to the dead of the revolution.

However, a new conflict on Mohamed Mahmoud sparked this week. A big budget project by art group, Women on Walls (WOW), is painting the exterior of the Greek Campus business hub, one of the most significant stretches of concrete bearing revolutionary art.

Through the new murals, the project aspires to “express the female hero succeeding in being unchained from all the anger and fear that is controlling us”, as part of the D-CAF arts festival and funded by the Swedish Institute in Stockholm. The new pieces include a heart with wings and geometric patterns, clearly daubed over the work of revolutionary artists.

Within hours of the erection of WOW project’s cranes, the first public reaction to the tampering of such a sensitive space was hastily sprayed on the wall: “This street is a necropolis. Only here no commercial graffiti is allowed.”

Among others, Ammar Abo Bakr, one of the revolution’s most illustrious artists, took to Facebook to voice his opposition: “In my opinion, this kind of commercial graffiti does not respect the art on a street like Mohamed Mahmoud with all that’s happened here. There’s nothing wrong with commercial graffiti, but it does not respect the art on this street which is more ephemeral.”

“The walls of Mohamed Mahmoud are where General Batran, Sheikh Emad Effat, Mina Daniel and Essam Atta were painted. And this is where most artists, including Abboud and many others worked, occupying the street for months, painting and collecting money from each other to pay for paints and materials,” Abo Bakr wrote.

However, Mia Grondahl, founder and manager of the WOW project, denies any wrongdoing and thinks that those who are criticising have questionable motives. She told Daily News Egypt: “We are not painting over graffiti from the revolution, despite rumours about town. Most of the art is already ruined from the past few years by police or whoever. We have four artists who originally painted on the street working with us. The reason these artists are attacking us must be because they do not like the WOW project, or they don’t like women.”

“We are providing women with secure walls to express themselves. But it is male artists who are complaining and are behind the attacks on us and they even reported us to the police for ‘destroying the walls of the Campus’,” she said.

Grondahl is a Swedish journalist and documenter of Egypt’s revolutionary graffiti since 2011, putting her research in to the book ‘Revolution Graffiti: Street Art of the New Egypt’. She continued: “Street artists should not fight against each other, we should work together to use art for humanity to liberate ourselves. People think that the street’s art is somehow holy, because of the history and the people who died there. I respect this and understand it, but I think some street artists are trying to have control. It is a war of territory, they are trying to own it and I think they are also jealous of our funding.”

Despite Grondahl’s assurances, Daily News Egypt observed that the project is directly painting over revolutionary art on the wall of the Greek Campus on Mohamed Mahmoud Street, but it is the whitewashing of one particular caricature that appears to reveal a more long-running antipathy between Grondahl and the graffitists. Photos uploaded by Ammar Abo Bakr clearly show the WOW team painting over a long-standing mural of a white Western woman with blonde hair with the comment “old nagging bitch” in Arabic sprayed beneath.

“This is where Mia Grondahl herself was painted, when she tried to tell the artists what they should paint, so they answered by putting her portrait on the wall in mockery. Today she comes to this street to initiate her project in order to restore her dignity in an attempt at stubborn revenge,” Abo Bakr wrote on Facebook.

Asked about Abo Bakr’s comments, Grondahl replied: “I don’t want to have a conflict with them. I have a whole chapter on Ammar in my book about Egypt’s revolution graffiti. I’ve asked him to explain to me what’s going on. It is bullshit that people say we are against the revolution. I’ve documented it from the beginning without pay. My interests are pure and noble.”

However, another graffitist working with Abo Bakr felt that the issue was more important than a clash of personalities: “We have remained quiet for two years and did not comment on any of the issues going on between Egypt’s revolutionary artist-community and Mia Grondahl. Egypt is a big place and we support any project that brings art to the streets. But why in this street? Why in this shameful way? How can this be done without the permission and against the will of the artists who have painted this street for years during the revolution?”

15 countries to participate in Colours Festival for paints in December