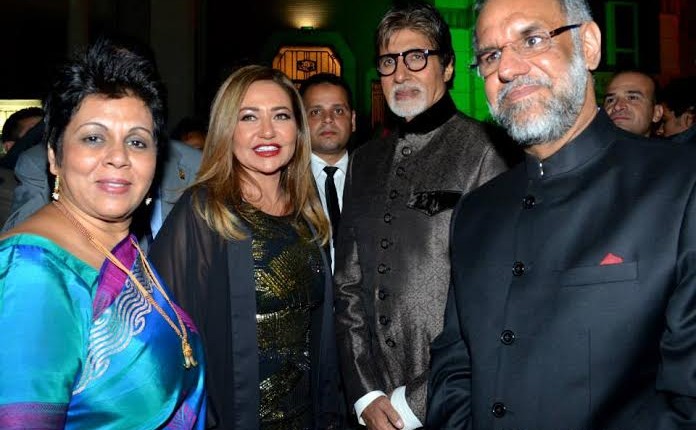 A wide stage with several dancers performing, bright colours taking over the place, the mixture of people gasping and laughing is all the viewer can hear.  In a huge hall, where an audience of all ages are well-dressed and happily enjoying the performance they had to book weeks in advance for, the Bollywood EXTRAVAGANZA play was shown.

“I have power, I have money, but I only miss being loved,” said the show’s villain, who deeply falls in love with the princess and tries his best to steal her from her lover, the hero. He tries to kill the hero, but the power of love saves the day and the hero gets to spend the rest of his life happily ever after with the princess.

The Bollywood EXTRAVAGANZA, ‘A Tale of Passion, Love and Revenge’, play is a part of the ‘India by the Nile’ festival, organised by Indian Embassy in Egypt. It includes an hour and a half of non-stop dancing and various artistic shows.

The play contains a sequence of events performed through song and dance with almost no subtitles, to prove that music is a common language between all nations.

The India by the Nile festival, which will last for three weeks, is running for the third time in partnership between the Indian Embassy in Egypt and the Ministry of Culture, the Ministry of Tourism, and the Cairo Opera House.

The festival features a broad variety of performances and events showcasing both the classical and the contemporary culture of India.

“The choice of holding the festival in Egypt is natural,” said Navdeeb Suri, India’s Ambassador to Egypt to Daily News Egypt. “It is the largest, most important country in the Arab world, one with which we have always enjoyed exceptionally close relations.”

Suri added that Egyptians are open-minded and receptive towards Indian culture, and that was an extra reason to hold the festival in Egypt.

The festival began with an interview with the internationally-renowned actor Amitabh Bachchan at Cairo Opera House. Bachchan talked about his films and his passion in life, afterwards giving another interview at the Pyramids.

The ‘India by the Nile’ festival has the distinction of being the largest foreign cultural festival in Egypt since the 25 January Revolution.

India and Egypt are the proud inheritors of two of the world’s most ancient civilisations, each remarkable for its phenomenal achievements and creativity over the millennia. Preserving and promoting the rich cultural heritage is a solemn responsibility of the current generation and those that follow. This conversation between experts and intellectuals from the two sides will hopefully create an enduring platform to share our learnings and best practices, according to Suri.

As a way of spreading the Indian culture, the Indian Embassy held a Bollywood Dance Workshop at the Cairo Opera House, where over 1,000 attended, according to Suri. Another workshop will be held in Alexandria on 7 April.

The embassy also held a conversation on Preserving Cultures. The conversation was under the title of “Words on water”, where several Indian and Egyptian cultural figures shared their experiences on the importance of continuity in preserving a country’s identity.

Another part of the festival is sharing Indian handicrafts and products with the Egyptian market. The welcoming and participation of Egyptians at the activities of the festival was outstanding and exceeded all the expectations.

“The shows of the Bollywood musical have been completely sold out,” said Suri, “The crowds at the Pyramids were quite beyond anything we had anticipated.”

Suri continued: “The performances of Advaita music group in Alexandria, Port Said and Ismailia got housefuls and we had to create extra space to accommodate all the yoga enthusiasts who turned up at Al-Azhar Park.”

The festival will last to 17 April, and its events and performances will travel from Cairo to Alexandria, Port Said and Ismailia.