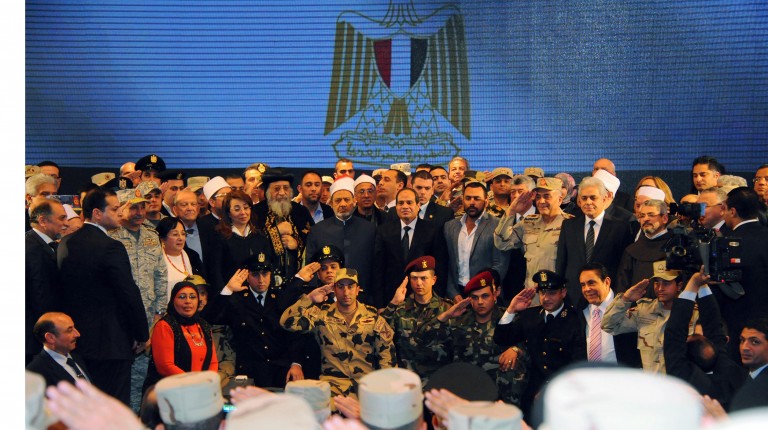 Al-Sisi was giving a speech following the latest terrorist attacks in North Sinai when he referred to Sabahy, seated among a group of army officials in the audience.

“Mr. Hamdeen, we are happy to see you with us today,” Al-Sisi said, to which Sabahy nodded with a smile.

The two stood together in a group photo at the end of the conference, in their first encounter since Al-Sisi was sworn into office last June.

“This shows that during times of strategic challenges to the country, different national forces align,” according to Maasoum Marzouk, a co-founding member of the Popular Current Party, previously led by Sabahy.

A young political activist and member of Sabahy’s last presidential campaign said via Facebook Monday that the “meeting between the two was a very important step that confirms a national alliance in the face of terrorism”.

Sabahy had dropped out of sight following the presidential elections, only making a public return to the political scene and media last week. This came as part of homage to activist Shaimaa Al-Sabbagh, a member of the Socialist Popular Alliance Party whose death by shooting raised widespread controversy regarding police brutality.

Known for his Nasserist tendencies, Sabahy reportedly participated in a press conference held by the party to demand punishment for the perpetrators of Al-Sabbagh’s death. He accused the Ministry of Interior of violently dispersing a peaceful march and conspiring to ‘hide the crime’.

“Sabahy shows a great deal of understanding of the state’s current security concern without stopping to express his objections to some of the pending or controversial cases in the country, such as Al-Sabbagh’s and the Protest Law,” Marzouk told Daily News Egypt Monday.

The day before Al-Sisi’s symposium, Sabahy wrote an article for Al-Shorouk newspaper, with the opening line: “January, four years completed but the revolution of 25 remains incomplete. On the fourth commemoration, the square was deserted.”

Sabahy wrote extensively about Al-Sabbagh, condemning an attempted cover up of the incident.

“We have not heard a word about Al-Sabbagh’s bloodshed from our elected president,” Sabahy said. He compared that to Al-Sisi’s reaction to a sexual harassment victim in Tahrir Square during his presidential inauguration celebrations, whom he personally visited in the hospital.

Sabahy also denounced the security forces’ killings in Sinai, demanding citizen’s equal right to life regardless of their political affiliations, whether they are from the “Islamists, the police or the army”.

In his speech, however, Al-Sisi mourned Al-Sabbagh’s death, using the phrase “she is like my daughter”, and called on the minister of interior to prosecute the person responsible for her death.

Following the symposium, Sabahy and a number of senior politicians attended a funeral organised by the Socialist Popular Alliance Party for Al-Sabbagh. For his part, Sabahy did not express wishes to run for parliamentary elections.

The Popular Current, following his legacy, decided to boycott elections, looking to become an official party only after the parliament is established. Alongside the Socialist Popular Alliance, Al-Karamah and Al-Dostour Parties, the Popular Current is part of an electoral coalition called the Democratic Current. The coalition’s stance regarding elections remains unstable due to serious objections on political practices in the country.