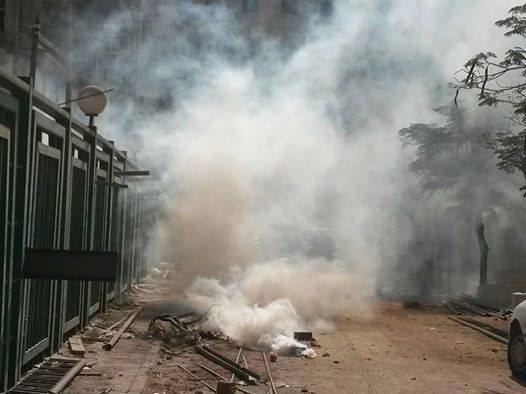 Students in several university campuses across Egypt staged demonstrations on Sunday in a new wave of protests.

The Students Against Coup (SAC) group promised to carry out the demonstrations in response to continued “arrests and kidnappings of female students, suspension of fellow students, and the siege of university campuses”.

SAC, a student organisation opposing the current regime, said in a Sunday statement that protests will continue against security forces until students regain dignity and respect.

Protests took place at Cairo University, Al-Azhar, and in the universities of Assiut, Zagazig, and Mansoura. In Beni Suef, police forces fired tear gas and birdshot, after campus security attacked a student protest.

The group said the administration at Fayoum University approved the expulsion of 24 female students, also depriving them of the right to stay in dorms for the semester, over unclear charges.

The Ministry of Interior said that one student was arrested for not showing his identification card to campus security.

The group said that two students were killed Friday in Fayoum and Ain Shams in clashes between police and pro-Morsi protests.

The Association for Freedom of Thought and Expression (AFTE) issued its weekly report documenting violations against students of last week.

“Violations were done by security forces, campus security and private security company’s personnel,” the report said. AFTE added that other “administrative violations” also were reported and included disciplinary measures where students faced expulsion by the university.

“In the University of Alexandria, police forces stormed into campus after clashes broke between members of the Student SAC group and students supporting President Abdel Fattah Al-Sisi,” AFTE said.

The report also mentions violations by security campus against students, where guards in Cairo University turn a student to the police after he refused to have his bag searched for the second time. At Zagazig University, an exhibition by a student activity in solidarity with Al-Aqsa Mosque was attacked and two students were sent to a disciplinary committee for investigation.

Riot police has been present outside a number of universities in anticipation of demonstrations.

On 14 October, in Alexandria University student Omar Al-Sharif died from birdshots fired by the police during the clashes between students and riot police, sparking a wave of condemnation.

Since the start of the academic year on 11 October more than 200 students have been arrested, according to AFTE.