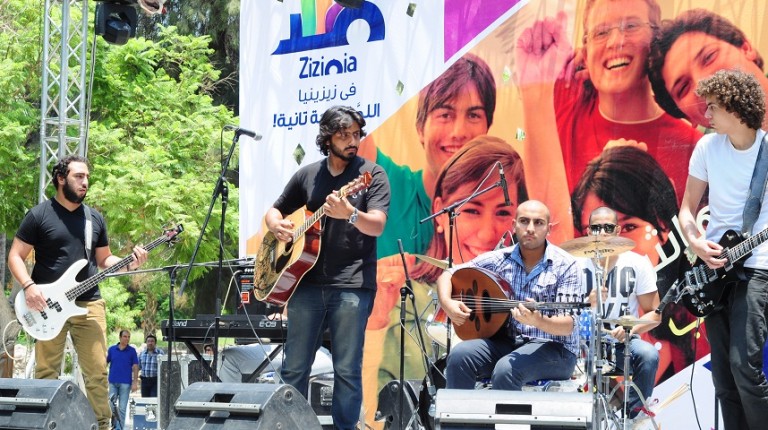 Blending a collage of architecture, animal parts, pieces of furniture, articles of clothing, guillotines, musical instruments, and simple everyday objects, the new exhibition of paintings by Mona Marzouk on display at the Gypsum gallery seeks to create a political and social dialogue amongst our everyday surroundings.

Entitled “Trayvon”, after the 17 year-old unarmed African-American high school student Trayvon Martin who was fatally shot in Sandford Florida by George Zimmerman – who pleaded self-defence and was later controversially acquitted of murder and manslaughter – the collection of paintings are connected by the theme of historical and present day injustice across the world.

Marzouk followed the shooting of Trayvon Martin and the Zimmerman case, and became obsessed with the incident and trial as many Americans had, she said.

The story of the shooting had been “online like any other story,” she said.  “I knew it was happening in the states. I wanted to know about it. I realised I had to work on this subject.”

Martin who had been walking home in the evening was followed and accosted by Zimmerman, a member of the local neighbourhood watch group.  An altercation ensued and Martin was shot dead.

“The first thing Zimmerman said [about Martin] to police was ‘he’s black.’ This man wasn’t charged [convicted] of anything and I felt there was no justice here for Trayvon and his family,”  Marzouk said.  “I felt it was important to express what happened to this young man for no reason.”

Black people in America were subjected to slavery, discrimination, violence, not to mention miscarriages of justice in the American legal system, she said.

“I found it really irritating somehow that these things are still happening” she said. “These people are human so these people have the right to be treated as human.”

Zimmerman’s non conviction verdict had a strong impact on her work, she said. “[In] The court room- lots of things that happen there, but there’s no balance.”

Wrongful convictions of innocent person happen in different judicial systems across the world, she said. “Somehow I felt very depressed reading these cases all over the world,” she said. “People are looking for justice and they were in jail.”

These feelings were reflected in Marzouk’s work.

One of the exhibited paintings depicts an electric chair melded with a theatre balcony. Other pieces include a guillotine melded with a piano; fish hooks below microphones and a courtroom podium and the genome connected to a ball and chain.

These associations draw from the situations everyday people live in but also mixes “different kinds of images and death,” forcing the viewer to confront heavy issues in the mundane, she said.

She abstains from taking a direct political stance in her paintings preferring her work to speak for itself.

Marzouk, who is originally from Alexandria, is not only a painter, but also a muralist and sculptor, known for her minimalist styles.  She is no stranger to politically loaded themes.  In past works, she has explored war, technology, patriotism, the impacts of the oil industry; and their manifestations in daily life.