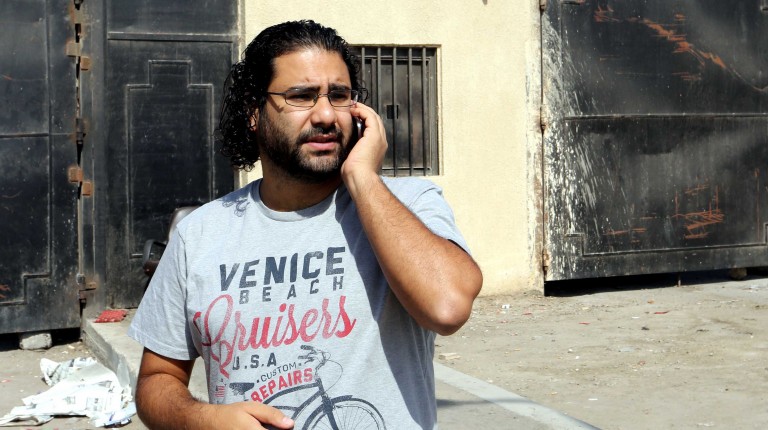 Prominent and imprisoned activist Alaa Abdel Fattah began a “full hunger strike” on Monday evening, which will continue “until he achieves his freedom”, a Tuesday statement from his family announced.

“I will no longer play the role they’ve written for me,” the activist said in the statement.

According to his family, Abdel Fattah made the decision after an emotional Sunday visit to his ailing father, Ahmed Seif, in the ICU of Al-Qasr Al-Eini Hospital. By the time Abdel Fattah was able to reach his father, the statement said, Seif’s condition had deteriorated and he had lost consciousness.

“That spectacle [of the visit] crystalised matters for him,” the statement read. “By the end of the few-minute visit Alaa had decided that he would withdraw co-operation with the unjust and absurd situation he had been put in – even if this cost him his life.”

Hunger strikes have seen conspicuous use by well-known activists in recent months to protest the grounds of their imprisonment. Al Jazeera Arabic reporter Abdullah Elshamy had been in hunger strike from January until the time of his release on 17 June, having been detained without charge since 14 August, 2013 – the day Egyptian security forces forcibly dispersed the mass sit-ins supporting former president Mohamed Morsi, and ensuing clashes left hundreds dead.

Abdel Fattah is currently being held at Tora Prison. On 11 June, he was sentenced, along with 24 others, to 15 years prison time by the Cairo Criminal Court for violating last year’s controversial Protest Law. The court also fined the defendants with EGP 100,000 each and ordered they be placed under police observation for five years after serving their time in prison.

The defendants had been arrested during the dispersal of a 26 November demonstration in front of the Shura Council, protesting against an article in the then draft constitution which would allow for the military trials of civilians. Upon arrest, they were accused of blocking roads, possession of weapons, attacking a police officer and stealing his radio, and “thuggery”.

They were also charged with violation of the Protest Law, approved only two days prior, which regulates and restricts the right to assembly. The law garnered wide criticism from several political movements, as well as domestic as well as international human rights organisations.