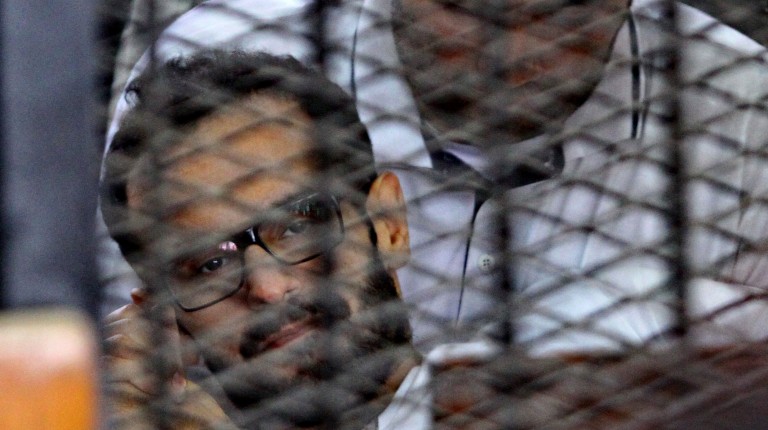 The defendants are accused of involvement in a range of activities, including forming an “operations room” to direct Muslim Brotherhood activities. They are also accused of defying the government during the Rabaa Al-Adaweya sit-in dispersal, and “spreading chaos in the country”, said a statement by Prosecutor General Hisham Barakat on 3 February.

Fixer and former press liaison for the Muslim Brotherhood Mohamed Soltan, was arrested last summer during the sit-in’s violent dispersal that saw former President Mohamed Morsi’s removal. He has been on hunger strike for over 160 days in protest over his detention.

According to state run Al-Ahram, the court received Soltan’s health report during the hearing from the forensic medicine department. The report asserted the defendant suffers from a pulmonary embolism, as well as high blood pressure, low blood sugar, and high uric acid.

The court ordered Soltan, son of prominent Muslim Brotherhood leader Salah Soltan, to receive medical care in the prison’s hospital, under the supervision of the prosecution.

Among the defendants is Supreme Guide of the Muslim Brotherhood Mohamed Badie.

Badie is also facing charges of escaping Wadi El-Natrun Prison in January 2011. Other charges include spying for the “International Organisation of the Muslim Brotherhood and its armed wing” from 2005 to 2013 by revealing classified information.