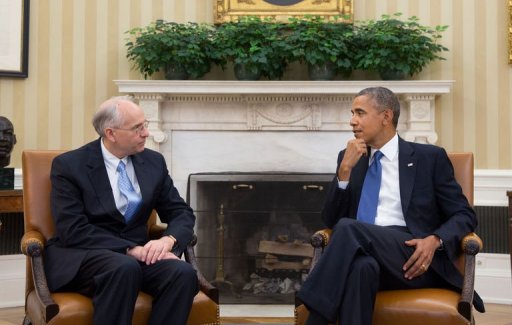 Booth, who is on his first visit to Cairo, met with Egyptian government officials and representatives of the Arab League, according to a US Embassy official. The special envoy, who was appointed by US President Barack Obama in August, met with interim Minister of Foreign Affairs Nabil Fahmy on Sunday.

Booth presented Fahmy with the US administration’s strategy to achieve a lasting peace between Sudan and South Sudan, according to the Ministry of Foreign Affairs. The pair discussed “mediation efforts relating to the Darfur crisis and the political, security and humanitarian situation in the [Sudanese] states of South Kordofan and Blue Nile.” They also addressed some of the outstanding issues that exist including the disputed region of the oil rich Abyei District on the border between the two countries.

South Kordofan descended into violence at the time of the separation due to the cancellation of popular consultations in the state by Governor Ahmed Haroun, which were held as per the Comprehensive Peace Agreement. Haroun is wanted by the International Criminal Court for war crimes and crimes against humanity. The sate of Blue Nile also suffered as a result of the process of dividing the two countries, and both states are now faced by a refugee and humanitarian crisis.

The Darfur region had been ravaged by conflict up until the 2010 Doha peace forum when an agreement was reached between the Sudanese government and the rebels. The process of international efforts to rebuild the region has begun and Doha hosted another conference in April to explore ways to achieve this. Former Minister of Foreign Affairs Mohamed Kamel Amr pledged Egypt’s support for the region.

The US Embassy official said that Booth “recognises the importance of key regional and multilateral partners in supporting a lasting peace between Sudan and South Sudan, and with the region more broadly.”

Fahmy stressed to Booth the “importance for the international community to support the positive and constructive dialogue between the leaderships of Sudan and South Sudan.” Fahmy added that this is the best way to come to an agreement on outstanding issues.