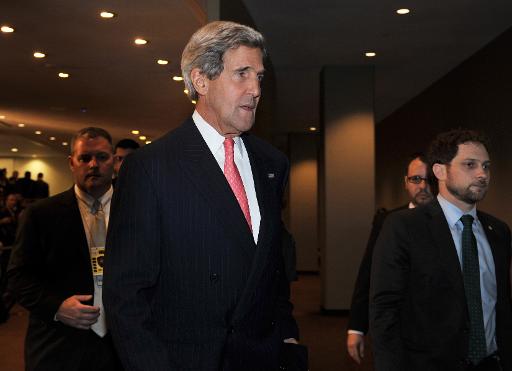 AFP – US Secretary of State John Kerry on Wednesday accused the Muslim Brotherhood of stealing Egypt’s revolution, in some of his toughest comments yet about the party that took power in the nation’s first democratic election.

In a speech to a forum on enhancing links between private sector businesses and diplomatic security agencies, Kerry said “the best antidote to extremism is opportunity.”

“Those kids in Tahrir Square, they were not motivated by any religion or ideology.

“They were motivated by what they saw through this interconnected world, and they wanted a piece of the opportunity and a chance to get an education and have a job and have a future, and not have a corrupt government that deprived them of all of that and more,” the top US diplomat said.

“And then it got stolen by the one single-most organized entity in the state, which was the Brotherhood.”

Since Islamist president Mohamed Morsi was ousted by the military in July a year after coming to power, the United States has repeatedly said that he had failed to live up to calls for an inclusive, transparent government.

And Kerry in August defended the army’s action to remove Morsi, saying it had moved as a bid at “restoring democracy.”

But as the military-led interim government has moved only slowly towards new elections, the US in October suspended a part of its $1.5 billion in annual aid to Egypt.

Kerry vowed earlier this month during a brief, surprise visit to Cairo that the United States would work with Egypt’s interim leaders and called on them to press ahead with reforms.