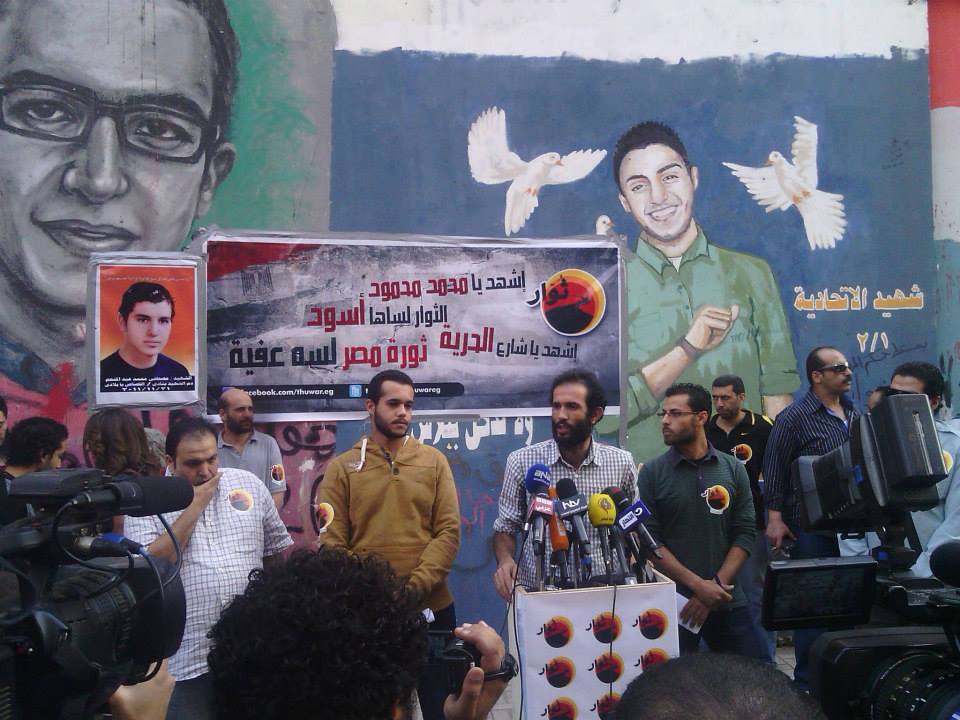 Any violence occurring during Tuesday’s scheduled marches commemorating the 2011 Mohamed Mahmoud street clashes will be the responsibility of the army and government, Revolutionary Front founder Haitham Mohamedein said Saturday.

The remarks came during a press conference held on Mohamed Mahmoud Street to prepare for the commemoration of the clashes that took place there two years prior.

The presser was led by the front, which includes the 6 April Youth Movement, Revolutionary Socialists, Misr Al-Qawia Party (Strong Egypt Party), and attended by several of those injured during the clashes and families of “martyrs”.

Mohamedein stated that there was no participation from the Muslim Brotherhood in the press conference reported Aswat Masriya.

The front also demanded the release of member Ayman Maher, who was arrested on Thursday while distributing flyers calling for demonstrations.

The Alliance of Revolutionary Forces and Ikhwan Kazeboon (The Brotherhood are Liars) as well as the Future Current meanwhile demanded that the Ministry of Interior issue an apology for their actions during the 2011 clashes.

The first two of these groups, however, issued a statement saying they would refrain from commemorating the memory of the clashes in Tahrir Square “in order to avoid further bloodshed,” according to state owned Al-Ahram.

The statement asked the presidency to respond to the revolution’s demands as well as rename roads with the names of martyrs and demanded that the government pays for the treatment of those injured during the Mohamed Mahmoud clashes. The statement warned that if their demands were not met, the alliance and Ikhwan Kazeboon would be forced to protest in Mohamed Mahmoud and risk their lives.

The Future Current held its own press conference Saturday, calling on the government to implement a plan that “improves the [Ministry of Interior’s] methods”.

Among the current’s other demands were the declaration of 19 November as “Martyr Day”, building a memorial for the clashes’ victims in Tahrir Square, and removing the head of the Revolutionary Victims’ Fund, to be replaced by a father of one of the victims.