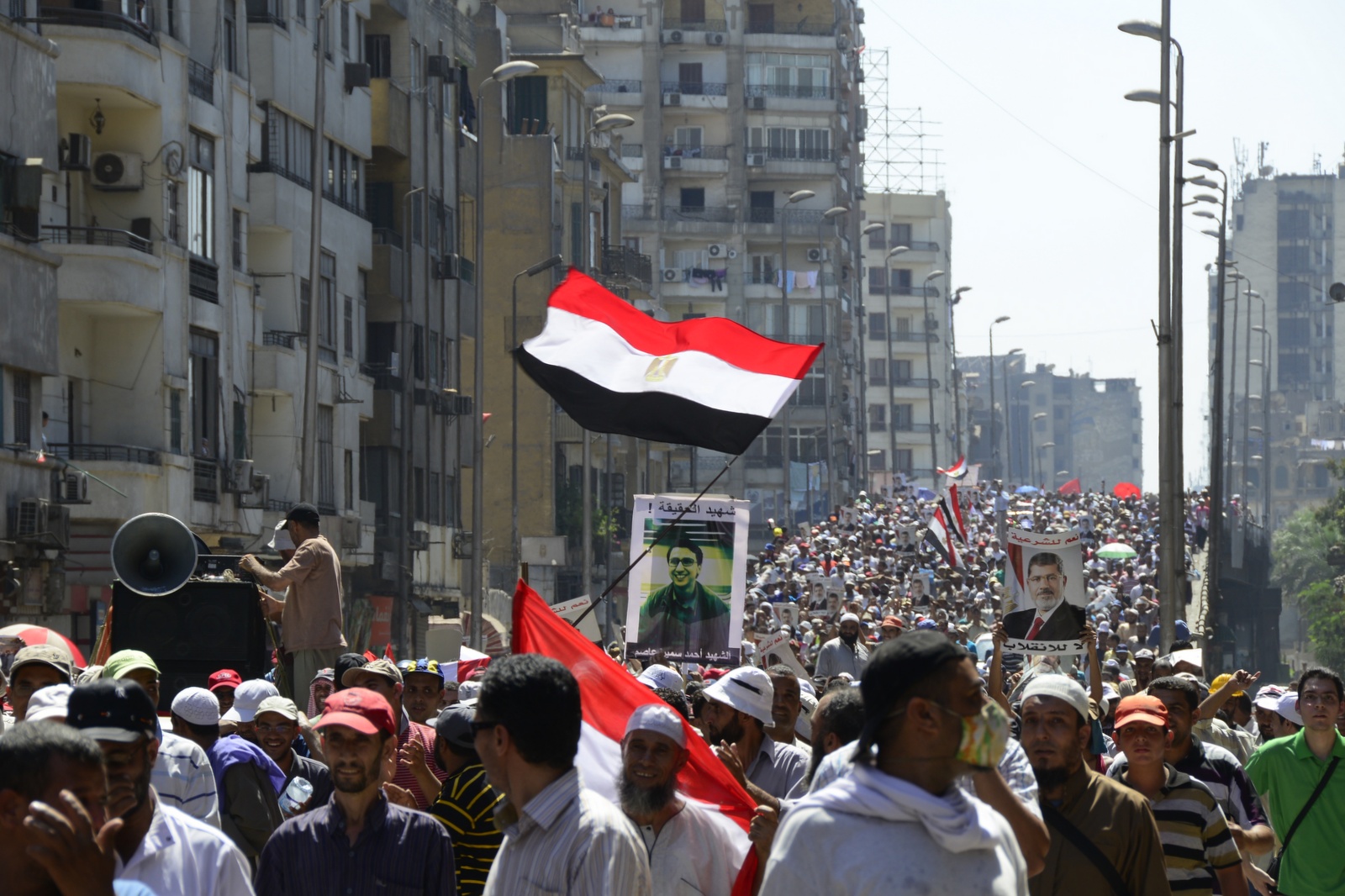 The Rabaa Al-Adaweya and Nahda square sit-ins were not dispersed by security forces on Monday morning, despite widespread rumours to the contrary.

Citing security sources and a government official, Reuters reported during the day on Sunday that “police would take initial action” against sit-ins “early on Monday”, however this proved to be not the case.

Rabaa Al-Adaweya’s divisions of volunteer guards appeared on a heightened sense of readiness early on Monday morning, as rumours that Central Security Forces (CSF) were en-route began circulating around the ranks of men armed with sticks and batons; sporting helmets and painters’ masks.

One such demonstrator, who sat on the outer perimeter of the makeshift barricades on Nasr Road said: “We will fight them with our sticks and with takbiir.” He, along with friends, had started their shift the previous morning, he said, and had been staying in Rabaa Al-Adaweya since the beginning of Ramadan. When asked about the plan in case of an incursion attempt by the CSF, he said: “They are armed; we only have sticks and rocks. If the police come down, people will come from inside the barriers and we will deal with them.”

Shortly after fajr prayer; the same time as violence erupted outside the Republican Guard Headquarters in early July, and around the time clashes broke out on Nasr Road a number of weeks later, minibuses carrying supporters of the ousted president began to arrive and stream into the sit-in, chanting: “God is the greatest!”

Dawn broke without incident, as normal levels of traffic and commuters returned to Nasr Road.

State-run Al-Ahram reported on Monday that the Ministry of the Interior had “postponed their plans” to disperse the sit-ins at Rabaa Al-Adaweya and Al-Nahda Square, citing an Associated Press interview with a security official. The official, who could not be named as he is prohibited from speaking to the press, reportedly revealed that the plans to form cordons around the protests early on Monday morning had been delayed as the plans had been “leaked to the media.” The plans had been postponed “to avoid bloodshed,” the security official reportedly continued.

Colonel Ashraf Al-Alani, from the Ministry of the Interior’s media centre, said there had been no plan to disperse the Rabaa Al-Adaweya and Al-Nahda sit-ins on Sunday night or Monday morning, adding that he was unsure as to the origins of the aforementioned Reuters article. “We would have announced it,” he added, stating any protocol of escalation would be announced at the same time.

Al-Nour Party announced their opposition to a forceful breaking-up of the sit-ins in a statement released on Monday. “The use of force will not solve the crisis,” the statement continued, but will “further complicate” the situation. Al-Nour indicated that “defusing the crisis through dialogue” was a far more preferable option.

Earlier Sunday evening, supporters of the ousted president Mohamed Morsi marched from Rabaa Al-Adaweya to the Minister of the Interior Mohamed Ibrahim’s residence in response to news reports of the sit-in’s imminent clearing, state-run Al-Ahram reported. The marchers reportedly chanted slogans against the interior ministry, called for Morsi’s return to office, and raised Egyptian flags and portraits of the ousted president.

In March, around 600 members of the 6 April Youth Movement marched on Ibrahim’s house and were violently dispersed by police, who “fired shotguns and teargas at protestors”, spokesman for 6 April Mohamed Adel said in a previous interview.

The Anti-Coup Alliance released a statement early Monday morning, in which they claimed they had “not received any invitation from any party to discuss any issues or proposals.”

FJP spokesman Tarek Al-Morsi explained that Sunday evening’s march to the minister’s residence, conducted by a group of “Anti-Coup Youth”, which included “Ultras” was in rejection of the “military coup.” Sunday’s march was different to that of 6 April’s, he added, as the latter used female undergarments which disrespected the minister, who Al-Morsi described as “Like a lion when dealing with me; but an ostrich when in war.”

The alliance also called for “a huge rally” from Al-Fateh Mosque in Ramses Square after Dhuhr prayers on Monday, in addition to a “million-man march” on Tuesday under the banner of “Together against the coup and the Zionists.” The statement added that the Alliance would “stand firm in its demands for a full return to constitutional legitimacy,” stressing that “the key to the solution is restoring President Morsi to his office and duties.”

Al-Morsi explained Tuesday’s marches are to “send the army back to the barracks,” adding that the march was “against Zionists” because of Israel’s alleged involvement in an explosion in North Sinai. “Regardless of what they [the victims of the blast] have done, Israel has killed Egyptians, breached Egypt’s borders, and it is not Israel’s place to act in this way.”