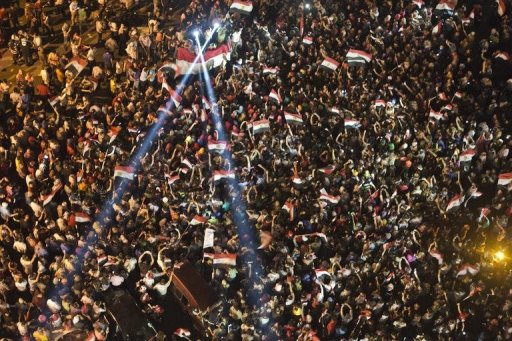 AFP – Islamist President Mohamed Morsi told Egyptians on Tuesday that he had been freely elected little more than a year ago and intended to continue to carry out his duties despite mass protests demanding his resignation.

Egyptian youth look on as opponents of President Mohamed Morsi call for his ouster at Cairo’s landmark Tahrir Square, on July 2, 2013.

In a televised address to the nation, Morsi warned that the only alternative to respecting the constitutional legitimacy of his presidency was further bloodshed on the streets.

He was speaking after seven people were killed and dozens more injured in clashes in Cairo between his supporters and his opponents.

The opposition Tamarod movement, which mobilised millions of demonstrators on Sunday for what the military described as the largest protests in Egyptian history, accused Morsi of “threatening his own people.”

Morsi’s speech came as the clock ticked down to a Wednesday deadline set by the army for the president to meet the “people’s demands” or have a solution imposed on him.

He made no direct reference to the ultimatum in his address but in a separate message posted on his official Twitter account called on the army to withdraw it, warning that he would tolerate no attempt to override constitutional order.

“President Morsi insists on (his) constitutional legitimacy and rejects any attempt to overstep it,” the message said.

“(He) calls on the armed forces to withdraw their warning and rejects any dictates, domestic or foreign.”

Morsi and army chief Abdel Fattah al-Sisi were locked in talks all day to “discuss the current crisis,” a military source said.

The ultimatum, which the army issued on Monday, drew a rapturous welcome from Morsi’s opponents but angry accusations from his supporters that the generals were preparing a return to the unpopular military rule of the months between Mubarak’s overthrow and Morsi’s swearing-in last year.

In his speech, Morsi said that respect for the constitutional order was the “only guarantee against further bloodshed.”

“The people chose me in free and fair elections,” Morsi said, adding that he would “continue to shoulder his responsiblities” as Egypt struggles with the legacy of decades of authoritarian rule.

He once again accused supporters of the regime of ousted president Hosni Mubarak of trying to sow chaos and incite violence.

Morsi said he stood ready to “give my life” to defend his legitimacy, echoing comments by a senior leader of the Muslim Brotherhood who urged supporters to be ready to sacrifice their lives to prevent a coup.

Tamarod leader Mohammed Abdelaziz told an Egyptian television channel: “This is a president threatening his own people.”

The president renewed his appeal to the opposition to join a dialogue, an appeal it has already repeatedly rejected as a sham.

The main opposition coalition said it was ready to join the urgent talks on a negotiated transition called for by the army and named former UN nuclear watchdog chief Mohamed ElBaradei as its chief negotiator.

The June 30 Front, which includes the grassroots Tamarod movement that brought millions of protesters out onto the streets across Egypt on Sunday — said it had delegated ElBaradei “to be the voice” of the opposition.

The Front “entrusts ElBaradei with the responsibility to ensure the execution of the Egyptian people’s demands and to draft a scenario that aims at the complete implementation of the roadmap for the political transition.”

As the political uncertainty grew, Morsi was hit with a spate of resignations, including by his foreign minister Mohammed Kamel Amr.

US President Barack Obama, whose government is a major military aid donor to Egypt, called Morsi to warn him that the voices of all Egyptians must be heard, a White House official said.

Obama told him Washington was committed to “the democratic process in Egypt and does not support any single party or group,” the official said.

German Foreign Minister Guido Westerwelle called on all sides not to squander the hopes of democracy of the 2011 revolution.

“These are decisive days for the political transformation in this key country of the Arab world,” he said.

Morsi’s opponents accuse him of having betrayed the revolution by concentrating power in Islamist hands and of sending the economy into free fall.

His supporters say he inherited many problems from a corrupt regime, and that he should be allowed to complete his term, which runs until 2016.