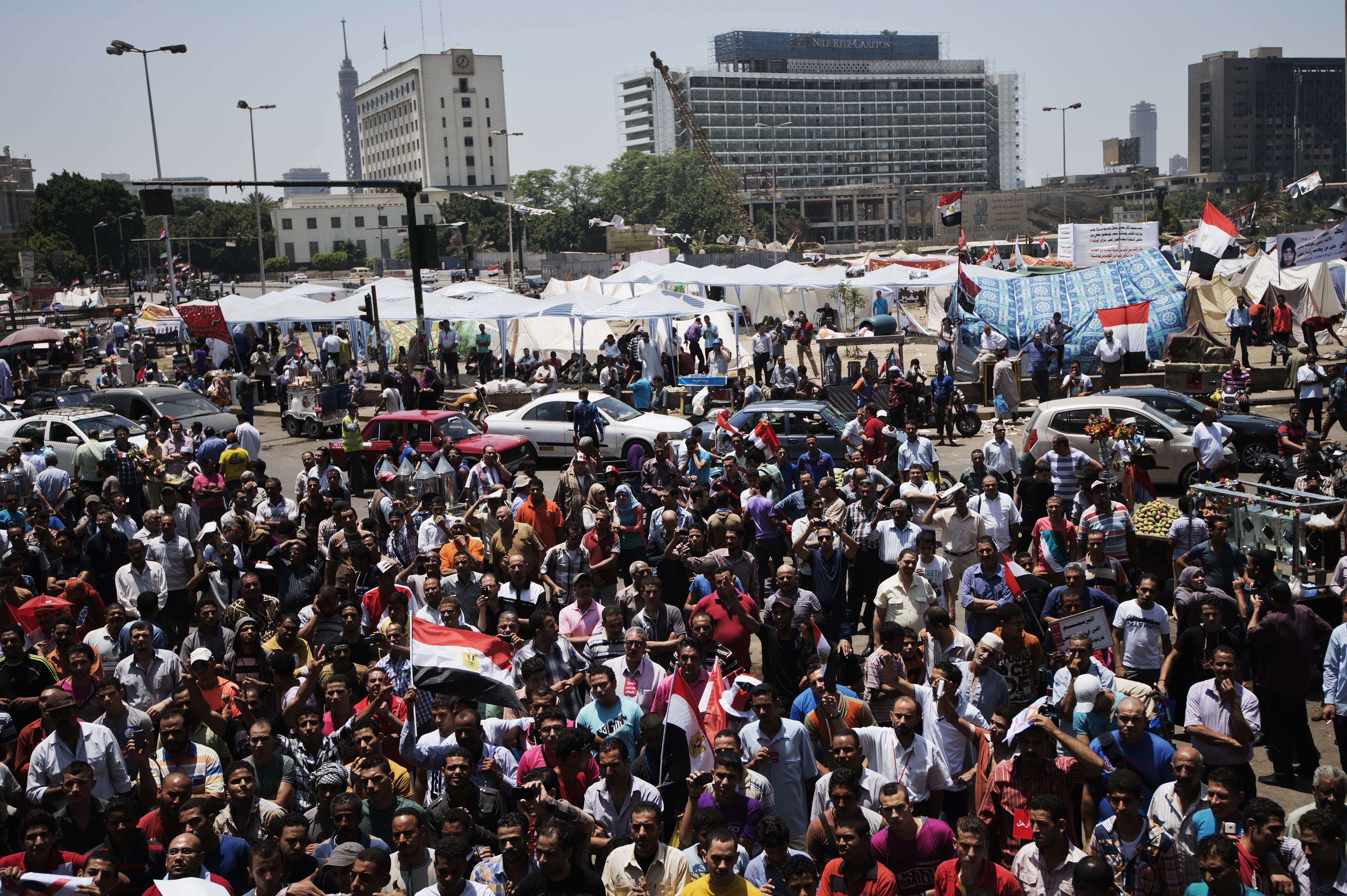 Thousands protested in governorates around Egypt against President Mohamed Morsi on Friday.

Hassan Mahrous in Alexandria said that clashes broke out on Friday, lasting for three to four hours in front of the Brotherhood headquarters in Sidi Gaber. According to the Egyptian Ministry of Health two people were killed, including an American who was stabbed in the protests, and 108 injured. Mahrous said that the other protester was killed by a live round, and that clashes ended when the Brotherhood members retreated.

Mahrous added, “people burned the files and everything else inside the Brotherhood office. It’s empty now.”

He said that the march from the Al-Qaed Ibrahim Mosque arrived at Sidi Gaber Square at around 2pm, which marked the start of the clashes.  Mahrous said that there were about 20,000 marchers, while there were only about 1000 Brotherhood members; many were protesting at the Rabea Al-Adaweya Mosque in Cairo, he added.

Mahrous stated that by 5pm there were around 30 to 40 thousand people in Sidi Gaber.

Abu Samra said, “We were surprised by the large number of people yesterday. People joined the protest due to Morsi’s speech. It worked against him.”

Dostour Party Member Ahmed Al-Naggar in Qalyubiya said that at sundown there were approximately 6000 people in Benha Square, along with several tents. Al-Naggar also said that in Shubra Al-Kheima many different political parties, including the Al-Tayar Al-Sha’aby and the Dostour Party, formed human chains spanning over 1 kilometre which included around 3000 participants.

He said, “The objective of all these marches is not just to protest, but to tell people to participate on 30 June.”

Al-Naggar mentioned that a majority of the protesters were women, and that most people present weren’t part of any political party or organisation.

Hamada Semelawy, a media officer of the Al-Dostour Party in Gharbiya, said that four marches took place on Friday containing about 8 to 10 thousand people. Semelawy said that the marches led to the governorate building, where there has been a sit-in for five days.

In Beheira, Al-Dostour Party member Ahmed Amr said that a march of 2500 people was attacked by “thugs” paid by the Brotherhood, claiming that when the protesters asked the thugs why they are doing this, they were told “you guys want to destroy this country and we’re worried about it.”

Amr said that clashes occurred at the local Freedom and Justice Party’s (FJP) headquarters when protesters began throwing rocks at the office, adding, “There is anger on the street against the FJP and they provoke the people.”

Amr said that marches in the city of Damanhour on Friday rallied around 30 thousand people, in Kafr Al-Dawar about ten thousand, and in Kom Hamada about five thousand.

Al-Dostour Party member in Daqahleya Hamdy Kennawy said that there were about 5000-7000 people protesting in Mansoura on Friday against the Brotherhood, noting that since this is the “first time protests erupted in the villages this is a large number,”  adding that the protesters were all from Mansoura.

He said, “Certain sections of society don’t know anything about politics and are apolitical. These people develop hatred towards the brotherhood.”

In Beni Suef, where 36 people were injured according to the Ministry of Health, Dostour Party member Waleed Mohamad said that as a march was passing in front of the Brotherhood’s office, people inside shot birdshot at the march, causing people to disperse.

Mohamad said, “Most of the protesters were women, and they were peaceful.”

In Tahrir Square thousands protested against President Morsi and the Muslim Brotherhood, demanding that the president step down.

Most of the chants were about the dignity of Egyptians, the continuance and persistence of the revolution, Egypt, the Brotherhood, or Morsi.

Although a few held posters of former president Gamal Abdel Nasser and former president Anwar Sadat, the majority of the protesters just held Egyptian flags. Others held pictures of Morsi or former US Secretary of State Hilary Clinton, both crossed out with a big red X.

The atmosphere was generally a joyful one with a lot of people laughing, making jokes, or holding political discussions around the square.

US State Department spokesperson Patrick Ventrell stated on Friday that the US does not support any individual group or party in Egypt, but rather is “very supportive of the Egyptian people and their way forward.” He also said that the US wants the Egyptian government to “protect the rights of the people,” adding that as the first democratically elected leader, it’s Morsi’s responsibility to build consensus among the people.

In solidarity with the protests planned for Sunday, worldwide support rallies are taking place in New York, Boston, Chicago, Houston, Toronto, Paris, London, Madrid, Melbourne and Sydney, according to Tamarod.