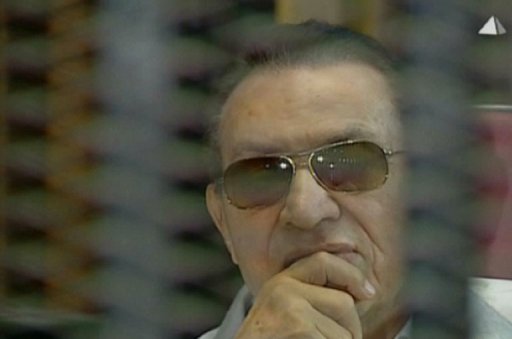 It is the first time that an official source has given a figure for the Mubaraks’ wealth, the subject of speculation since a popular uprising in February 2011 toppled the regime.

The personal wealth of the wives of Alaa and Gamal Mubara, Heidi Rassekh and Khadiga al-Gamal, was also included in the figure.

The sum is made up of the “value of their assets in cash and in shares in companies in Egypt”, Hefnawy said in comments published by the official MENA news agency.

The family’s property also accounts for one billion Egyptian pounds of the total, Hefnawy said, without giving further details, particularly on property overseas.

“Mubarak used his power and enriched himself and his relatives,” he added.

Mubarak, 85, and his two sons are currently being held in a prison south of Cairo.

Mubarak was last year sentenced to life in prison for corruption and in connection with the murder of demonstrators during the revolution, but he is being retried on appeal.

His two sons are also being held on corruption charges.

Mubarak’s Suzanne was arrested after the fall of the regime, but authorities freed her in May 2011 after she returned around $570,000 of her personal goods to the state.

His daughters-in-law were also freed and have not been prosecuted.

Two years ago, Egypt began proceedings in several countries, including Switzerland, aimed at freezing Mubarak wealth hidden abroad and returning it to Egypt.

Mubarak, his wife and their son Gamal last week agreed to return to the state gifts worth $600,000 given to them by a former minister.