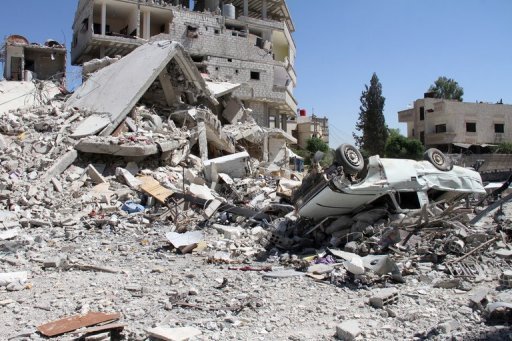 AFP –  Syria’s opposition vowed to fight on to topple President Bashar al-Assad, saying any political solution to the conflict must lead to the fall of the regime.

The National Coalition spoke out as troops and rebels were locked in fierce clashes outside the Damascus district of Qabun as the army tried to storm the area, according to the Syrian Observatory for Human Rights.

The opposition’s statement also came after G8 leaders meeting in northern Ireland this week said they were “committed to achieving a political solution” to the war.

“The Syrian National Coalition is committed to any political solution that puts an end to the bloodshed, and achieves the Syrian people’s aspirations to bring down the Assad regime,” it said in a statement.

The group called on the United Nations to investigate the alleged use of chemical weapons by Assad’s forces in rebel-held areas, and said it “reserves the right to use all means at its disposal” to topple Assad.

“The Assad regime has continuously killed civilians using ballistic missiles, chemical weapons and warplanes. It is the only source of terrorism in Syria,” it said.

Outside the Damascus district of Qabun, the Observatory said at least two rebel fighters had been killed, with others wounded.

“The district has come under continuous, heavy shelling over the last few hours,” the Britain-based Observatory said.

The northeastern neighbourhood of the capital has been a battleground for months, with the military regularly targeting it with shells and air raids.

Meanwhile, near the capital, fighters from Lebanon’s Shiite group Hezbollah joined troops in a push to cut off rebel supply lines.

And the Coalition said it feared a “massacre” was imminent in southern Damascus, as Assad loyalists amassed around rebel areas there.

Government troops and Hezbollah fighters have clashed with rebels in Zayabiyeh village, southeast of Damascus, the Observatory said.

Hezbollah’s Al-Manar television reported that the army was advancing towards Zayabiyeh, just south of the confessionally mixed district of Sayyida Zeinab, named after an important Shiite Muslim shrine.

The Lebanese Shiite movement has been fighting alongside the army for months in the district, which lies in an area that rebels from southern Damascus have used as their main rear base.

Activists say the regime is trying to crush the rebellion on the outskirts of Damascus to cut off supply lines to rebel pockets inside the capital.

Ismail said Hezbollah and the Abu al-Fadl Abbas Brigade — a mostly Syrian Shiite force that has attracted Shiite fighters from elsewhere in the region — were playing a key role in the fighting.

Hezbollah was also credited with an important role in the army’s recapture of the rebel stronghold of Qusayr in central Homs province earlier this month.

The Coalition warned that Assad loyalists were trying to advance on the south of the capital, and that rebel-held areas were under blockade.

“Food and medicines are not being allowed in,” it said.

“Now, regime troops and militiamen backed by Hezbollah and the Abu al-Fadl Abbas Brigade are deploying en masse, with dozens of military vehicles and tanks, rocket launchers and heavy machineguns,” the group said.

Some 120,000 people living in strife-torn southern Damascus are trapped and “fear that (regime) forces may commit a new massacre” there, saying there may be “no way out” for residents.

Elsewhere, fierce battles broke out between rebels and troops in Idlib, northwestern Syria, the Observatory said.

Opposition forces captured an army post on the road linking the coastal province of Latakia to Ariha in Idlib province, and two tanks were destroyed.

And in Jordan, border guards killed a Syrian and wounded two others after they attacked Jordanian soldiers at the border while trying to enter the country, the army said.

US media meanwhile reported that a top US officer clashed with Secretary of State John Kerry when he called for air strikes against regime air bases used to launch chemical weapons attacks against rebels.