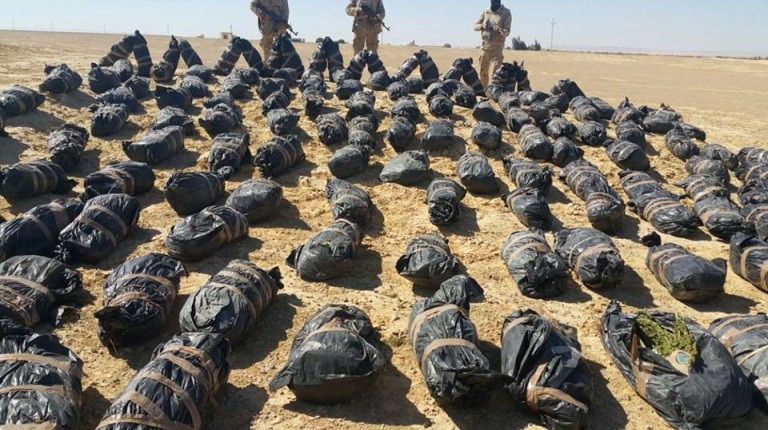 Army units affiliated with the third field army continued the sweeping operation it has launched against militants stationed in the area of Mount Helal. The security forces managed on Tuesday to arrest 12 militants, the army’s spokesperson said in a Facebook statement.

The forces were furthermore able to seize a four wheel drive vehicle equipped with a machine gun. The vehicle also contained quantities of explosives, military clothing, and video materials related to militants, the statement explained.

“The forces managed moreover to destroy another car bomb that was prepared to be used against army and police forces. The sweeping operation also resulted in the discovery of fuel storage points, three motorbikes, and the destruction of seven terrorist stationing points,” the statement read.

The statement added that during the sweeping operation the forces burned 24 farms that grew the poppy plant, in addition to being able to arrest two wanted criminals who were trying to smuggle large amounts of money.

Since 2013, state security forces, represented in both the army and the police, have been engaged in violent clashes with “Sinai Province,” known previously as Ansar Beit Al-Maqdis. In 2014, the group declared its affiliation to IS and has launched deadly attacks on army and police checkpoints.

Over the course of the last two years, the Egyptian armed forces launched counterattacks against militant stationing points across the Sinai Peninsula, where the group is based, particularly in the cities of Sheikh Zuweid, Rafah, and Al-Arish.