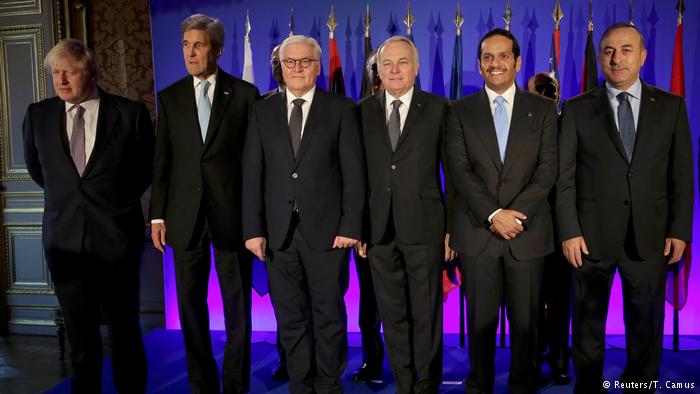 Saturday’s meeting in Paris has brought together the top diplomats from the US, Europe, and the Middle East in another attempt to move toward an effective peace process in Syria, where a nearly six-year-old war has killed more than 300,000 people.

Among those at the meeting are US secretary of state John Kerry, German foreign minister Frank-Walter Steinmeier, British foreign secretary Boris Johnson and Turkish foreign affairs minister Mevlut Cavusoglu, along with their counterparts from Qatar, the United Arab Emirates, Jordan, and Saudi Arabia.

Talks were to focus on ensuring humanitarian access to the northern Syrian city of Aleppo, where Syrian forces backed by Iranian militias and Russian airstrikes have been conducting a fierce offensive against rebel-held areas that has killed hundreds of civilians and displaced thousands more.

The Paris discussions will also aim to pave the way for renewed peace talks in Geneva between all of the warring parties.

“My goal in all this is … to get both sides, all of the forces, to the table in Geneva,” Kerry said in Paris on Friday night.

But his frustration at the lack of progress was evident.

“But what am I supposed to do? Go home and have a nice weekend in Massachusetts, while people are dying? Sit there in Washington and do nothing?”

His comments come as Syrian president Bashar Al-Assad and his ally, Russian president Vladimir Putin, seem to be intent on pushing home their advantage, as government and allied forces draw close to completing the recapture of Aleppo, the eastern parts of which have been held by anti-government rebels since 2012.

Observers say that the recapture of Aleppo by the Syrian regime will, however, not spell an end to the conflict in Syria, as large swathes of the country are still under the control of Islamist extremists such as Al-Nusra and the self-styled Islamic State (IS), as well as US-backed Kurdish militias.

On Wednesday, Western powers, including the US, Britain, France, and Germany, called for an “immediate ceasefire” as the humanitarian crisis in the city grows amid increasing reports of war crimes on both sides.

The UN general assembly also voted to pass a resolution on Friday that demanded an immediate cessation of hostilities in Syria and urgent humanitarian aid access. Russia, China, and Iran all voted against the resolution, which is non-binding but carries political weight.

The conflict has exacerbated tensions between the west and Russia, with the US and Europe insisting that Al-Assad should step down to bring eventual peace to Syria, while Moscow continues to back the Syrian leader in a bid to strengthen its foothold in the Middle East.

More US troops to Syria

In another development on Saturday, US defence secretary Ash Carter said as many as 200 more American troops were being sent to Syria to help Kurdish and Arab fighters trying to retake the key IS stronghold of Raqqa.

Three hundred US troops are already in the country, authorised to recruit, organise, train, and advise local forces in their fight against IS.

Announcing the deployment at a security conference in Manama, Bahrain, Carter also decried Russia’s operations in Syria, saying Moscow had “only inflamed the civil war and prolonged suffering of the Syrian people”.