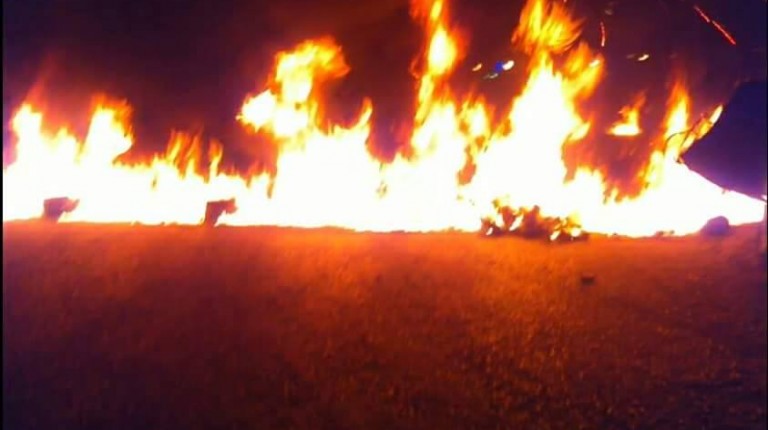 One citizen and a conscript were injured in Menufiya during clashes between police and protestors on Friday, Health Ministry spokesperson Hossam Abdel-Ghaffar confirmed to Daily News Egypt.

Speaking on another protest in Maadi, Abdel-Ghaffar added: “A corpse of a 23-year-old student was transferred yesterday [Friday] to a private hospital in Dar Al-Salam neighbourhood of Maadi. His family claims that he was shot during the protest, but this is not confirmed.”

The Students Against the Coup (SAC), an opposition university students movement, has been calling for protests across Egypt under the theme of “We will break you”. The movement’s calls have been ongoing for one month ahead of the second anniversary of the ouster of the Muslim Brotherhood regime in 2013.

Tens of students took to the streets of Maadi and Menufiya on Friday. The SAC division of Menufiya University posted on their official Facebook page pictures of their attempts to block roads in some districts using fireworks, as well as pictures of a dead student featuring live bullet wounds. The SAC group also said there have been violent clashes with security forces, announcing the death of another student in Maadi.

The Interior Ministry neither confirmed nor denied the incident. However in an official statement by the ministry, it said they arrested 39 people on Friday for alleged Muslim Brotherhood membership.

A video that was posted online by the SAC, shows one student addressing “revolutionary youth” saying: “We have to keep ourselves away from doomed political elites, and reunite our front into a real confrontation with this regime and its institutions.”

The group also added that the uprisings will continue until 14 August.

Following the ouster of Muslim Brotherhood regime in 2013, SAC has launched several protests inside university campuses across Egypt. Many of them were stormed by police forces, leaving many arrested, injured or killed.