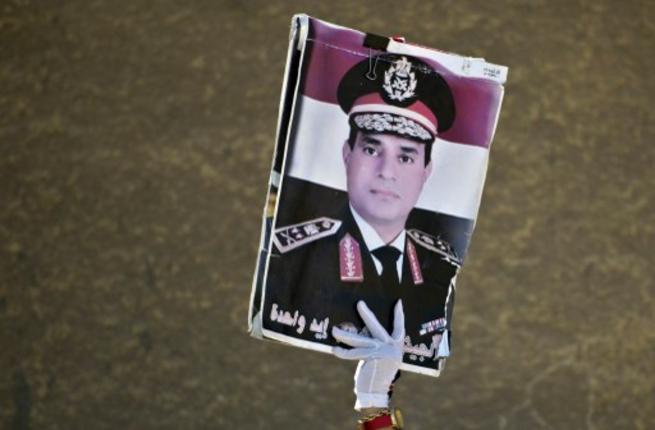 The 6 April Youth Movement has said a presidential campaign by Minister of Defence Abdel Fattah Al-Sisi would only serve to further divide and polarise Egyptian society.

“The defence minister running for the post of president of the republic would not benefit the divided nation and will not achieve the objectives of the revolution,” said the youth movement in a Wednesday statement. The group added that their opposition is “in order to preserve the Egyptian army, [and based on] the belief that the protection of Egypt is dearer than ruling it, and our confidence that our armed forces did not act to have their leaders rule Egypt.”

Despite not officially announcing his intention to run for president, Al-Sisi has dropped heavy hints. On Tuesday he said that “as a man who loves his country and loves the Egyptian people” he cannot “ignore the demands of many of them or turn his back on their will.”

The 6 April Movement made reference to the defence minister’s remarks in their statement. “Anyone who loves his homeland and loves the Egyptian people cannot ignore or turn his back on the state of division and acute polarisation plaguing society,” the group said, and called for Egyptians to place “national interest above narrow self-interest.”

“Egypt’s strength is not linked to a personality or the name of a potential president, but it is the will of all Egyptians to build their country and its future,” the youth movement added, saying that no one person is able to solve all of Egypt’s problems.

Since Al-Sisi announced the removal of Mohamed Morsi as president in July 2013 he has enjoyed wide popular support in Egypt. Supporters of the ousted president along with groups that oppose the notion of a military-linked ruler as president have openly opposed Al-Sisi’s widely expected candidacy.

The defence minister has received endorsements to run for president from the Supreme Council of the Armed Forces and Russian President Vladimir Putin.

Al-Sisi must resign from the military in order to announce his candidacy for president under the current constitution. On Tuesday he said that necessary procedures for this would be taken in “the next few days”.