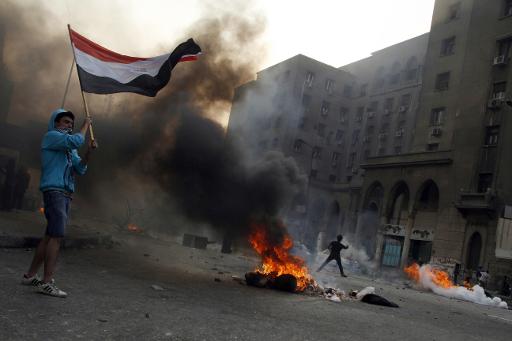 AFP – Opponents of the coup that toppled Egypt’s elected president Mohamed Morsi in July warned Wednesday the country was headed towards civil war and urged the international community to pay attention.

“The present regime since the coup is pushing Egypt towards civil war,” journalist and former chief editor of the Al-Shorouk newspaper, Wael Kandil, told reporters in Geneva.

He warned the security forces’ crackdown on supporters of Morsi’s Muslim Brotherhood, which has resulted in more than 1,000 people being killed and more than 2,000 arrested nationwide, was ripping the country apart.

Kandil was in Geneva to help launch a new loose coalition of coup opponents from diverse political backgrounds, based inside the country and abroad.

Calling themselves the “Anti-coup Egyptian delegation of public diplomacy,” the group said it was visiting UN agencies and diplomatic missions to press its case that the military had hijacked the 2011 revolution that ousted Hosni Mubarak.

Hatem Azzam, vice president of the moderate Islamist Al-Wasat Party and a member of the now disbanded 2012 parliament, compared Morsi’s overthrow with the 1973 coup in Chile, when socialist President Salvador Allende was ousted by a military junta.

Eslam Lotfy, a lawyer at Egypt’s High Court of Appeals and member of the leftist Third Square Movement, said while had been against Morsi, he was “also against the coup