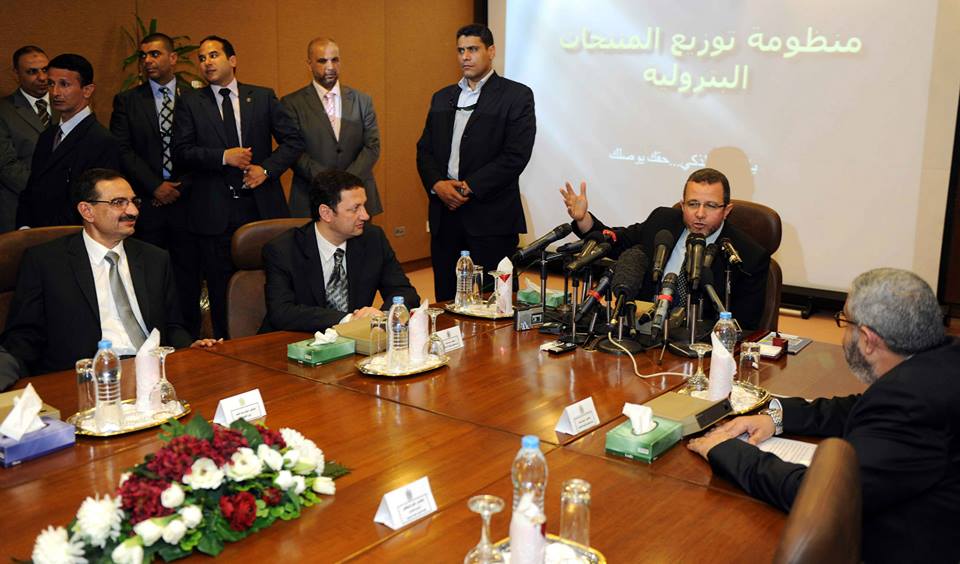 The second phase of the fuel subsidy smartcard system will start next month in an effort to combat smuggling and rationalise subsidies, said Prime Minister Hesham Qandil on Saturday.

Speaking at the press conference in the headquarters of Egyptian General Petroleum Corporation (EGPC) in Maadi, also attended by Qandil’s ministers of petroleum, finance and supply, the prime minister said that about 18,000 cards had been distributed during the first phase.

“I’m extremely happy about the new phase,” he said, clarifying that starting next month, around one million registered cars and vehicles running on diesel would shift to use of the subsidy cards, followed by gasoline-run vehicles in August.

To obtain their own cards, car-owners must register on one of a number of newly-launched websites, including www.esp.gov.eg, he explained. After filling out personal information, users are asked to choose a distribution location to pick up their smartcard, which will be provided free of charge to vehicles and truck drivers.

Other card providers include Agriculture Credit Bank ACB, traffic units and post offices, along with private and governmental institutions, which are expected to collect data from their employees to help them obtain their cards.

“We are suffering from a total shortage of petroleum materials in the market, with the rate of consumption exceeding normal levels by around 10% to 20%,” said Tarek El-Barkatawy, head of EGPC. Qandil meanwhile announced that the government has found 8% of oil stations “are imaginary and do not even exist,” referring to an increase in smuggling of the commodity, which has exacerbated the current predicament.

Officials have been attributing the ongoing nationwide fuel shortage to smuggling, amid growing anger from drivers. The subsidy cards programme is aimed at curbing this phenomenon as well as restructuring the fuel subsidy system, which is costing Egypt billions of pounds. Rationing fuel subsidies is one of the International Monetary Fund’s prerequisites in order to provide the country with a $4.8bn loan.

According to a new budget announced recently in the Shura Council by the finance ministry, the state is expected in 2013 to pay EGP 120bn for subsidies, but with smart card system, this may fall to EGP 100bn the following fiscal year.

Qandil also revealed that the government managed to repay money it owed this year to petroleum companies totaling $7bn, as well as repaying some of previous years’ outstanding debt.

The government, which is trying to reduce its imports of fuel and other commodities as its reserves hover around 60% below pre-revolution levels, is considering $18bn worth of investments to construct and upgrade oil refineries in the hopes of raising domestic production levels.