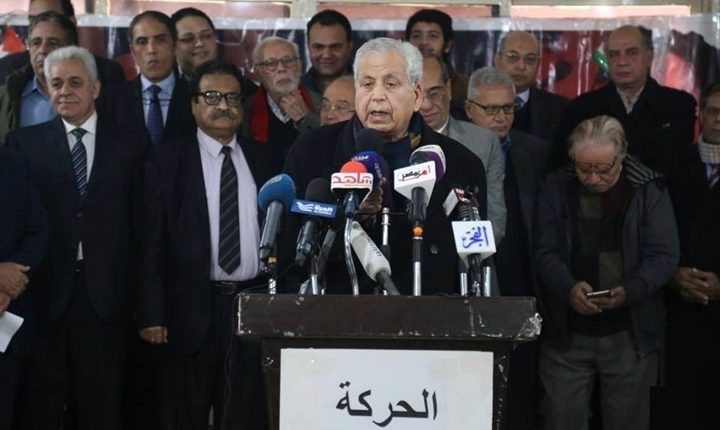 The Civil Democratic Movement announced its project on national dialogue, which the movement says aims to instigate a comprehensive process of political and legislative reform that moves society forward with a strong will on the road to building a modern democratic civil state.

The announcement came in a press conference at the headquarters of the Conservative Party in Cairo to inform the public about their project for political and economic reform that will be presented in the national dialogue.

According to the movement, the project guarantees political pluralism that leads to the peaceful transfer of power and is based on respect for all rights in thought, organisation, and expression of opinion with the existence of effective political institutions, on top of which are elected legislative institutions, an independent judiciary, a government subject to constitutional and popular accountability, and civil and ideologically diverse political parties.

Akmal Qortam — Head of the Conservative Party — said during his speech at the conference: “We in the civil movement are political parties that believe that we have a national responsibility and that we have a constitutional function that exists in all countries, and the parties are the education and political development of citizens.”

Qortam stressed that the movement, if it joins the national dialogue, will participate in a complete project that the parties of the movement will agree on despite their differences due to their realization of its importance to the homeland.

George Ishaq — a leader in the Civil Democratic Movement — said that “there is a problem with the parties, and so far, we have not gone out to the governorates.”

“It is never appropriate that we are talking about a national dialogue and the security apparatus is still working against those with opinions and those who disagree with the authority,” he added.

“We must be an effective force in what we wish, and it is not appropriate that we are preparing for a dialogue and yet there are still people of opinion in prisons. All prisoners of conscience must be released, and the persecution of citizens must be stopped.”

For his part, Fareed Zahran — Head of the Egyptian Social Democratic Party — said that the civil movement is a movement that includes 12 political parties and a large number of public and independent figures and considers itself part of the Egyptian state and its political system.

Zahran pointed out that posing political opposition against the state is a big fallacy that must be corrected, calling for the adoption of scientific, political, and legal methods in our work in the civil movement.

He added that the civil movement is a major part of the opposition in Egypt, has played a role in opposing the policies of the ruling regime, and has always called for a national dialogue among the different parties of society, and this is its main demand, so we received the president’s invitation positively and entered the national dialogue.

He noted that the civil movement succeeded in preparing unified visions, and this is an achievement in light of the atmosphere that existed, adding that the movement affirms that the way out of the current crisis is not to deny it, but to listen to alternatives and to review existing policies.

Hamdeen Sabahi — former presidential candidate and Leader of the Karama Party — said that the Civil Democratic Movement formulated a vision with political and economic goals, and it will join and fight in the national dialogue in order to achieve it.

Sabahi also explained that the movement agreed to join the national dialogue with conditions, which is the release of all prisoners of conscience, and if it is not achieved, it will not enter the dialogue.

He pointed out that the door is open to everyone, even those who disagree with the movement, by inviting them to unite, and the civil movement does not want an explosion or a coup, it wants a peaceful change to the status quo.