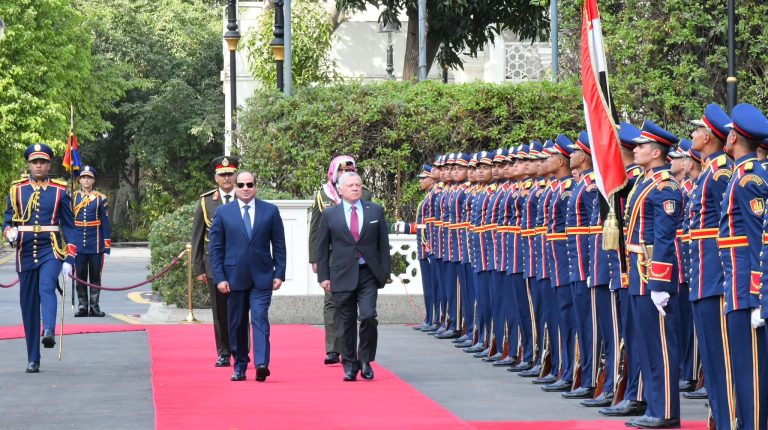 Egypt’s President Abdel Fattah Al-Sisi met with King of Jordan Abdullah II bin Al-Hussein on Saturday at Ittihadiya Palace, where an official reception ceremony was held for the king.

The official spokesperson for the presidency stated that the president welcomed the visit of King Abdullah to Cairo, praising the strong brotherly relations between Egypt and Jordan and the advanced level they have reached on various matters.

They also discussed a number of issues of common concern, as the two sides stressed the importance of uniting and synergising the efforts of Arab countries to address the existing crises in some countries of the region within the framework of respect for their sovereignty and unity and with the aim of ending the human suffering of their brotherly peoples.

Al-Sisi also expressed his aspiration to strengthen bilateral relations in a way that contributes to achieving the interests of the two countries and brotherly peoples, whether at the bilateral level or within the framework of the tripartite cooperation mechanism with Iraq, especially at the economic and commercial levels.

The president also appreciated the efforts made by the Jordanian government within the framework of caring for the Egyptian expat community in Jordan.

For his part, the king of Jordan expressed his country’s deep appreciation for Egypt at the official and popular levels and its pride in the extended ties that unite the two brotherly countries, as well as the course of relations at the level of the tripartite cooperation mechanism with Iraq, stressing Jordan’s keenness to benefit from Egypt’s development efforts in all fields through an exchange of experiences and joint investment.