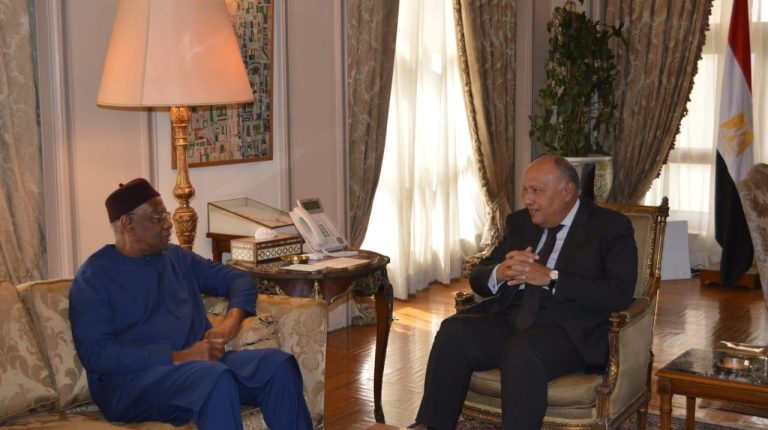 Egypt’s Minister of Foreign Affairs Sameh Shoukry received on Monday Abdullah Bataili, the Special Representative of the UN Secretary-General and Head of the UN Support Mission in Libya (UNSMIL).

Ahmed Abu Zeid, the spokesperson for the Ministry of Foreign Affairs, said that Shoukry congratulated the Special Representative on his new post as he visits Egypt for the first time, expressing Egypt’s full support to his mission to restore stability in Libya.

Shoukry stressed the centrality and neutrality of the UN, which enjoys the confidence of the parties inside Libya and in the international community.

He described the continuous efforts that Egypt has made and continues to exert sincerely to resolve the crisis, especially during its recent hosting of the rounds of the constitutional process between the House of Representatives and the Supreme Council of State.

The Foreign Minister stressed the importance of completing this process and holding presidential and legislative elections simultaneously in Libya in order to end the crisis and achieve the aspirations of the brotherly Libyan people, stressing the Libyan ownership of the solution and the importance of respecting the elected legislative institution.

Minister Shoukry stressed that there is no room for the implementation of existing agreements and the commitment to legal and political entitlements, without specific mechanisms and timeframes for implementation, and the active follow-up by the international community to the parties responsible for implementation.

“This also requires the implementation of UN and international decisions on the departure of all foreign forces, mercenaries and foreign fighters from Libya within a specific time frame, he added, stressing in this regard the importance of supporting the mission of the Joint 5+5 Military Commission.”

For his part, the Special Representative of the UN Secretary-General reviewed his efforts and contacts on the Libyan scene and his keenness to speak and listen to all parties.

He noted that he had been wishing to visit Egypt since taking office, but that due to his knowledge of the climate conference’s obligations and preoccupations, he was unable to complete the visit earlier.

He also expressed his full appreciation for the constructive and pivotal Egyptian role in Libya, and what Egypt has suffered greatly over the past years as a result of the continuation of that crisis, and his aspiration to coordinate with Egypt in the coming period,

The two sides agreed to intensify work towards advancing the Libyan political solution in order to achieve security, stability and prosperity in Libya.