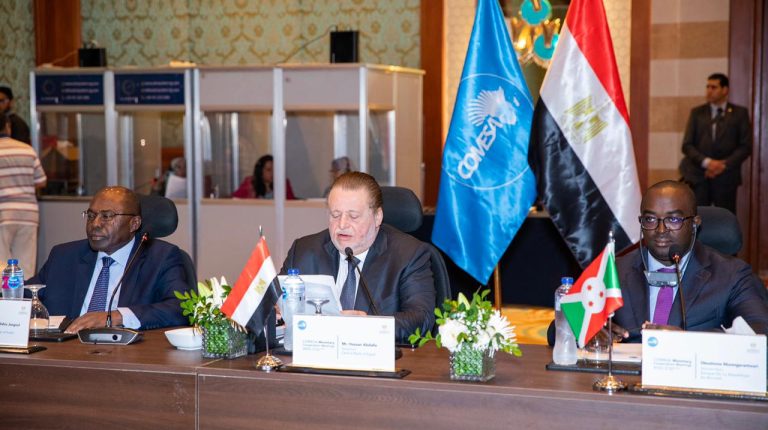 This comes in implementation of the presidential directives to continue supporting African cooperation and integration.

The meeting was attended by a number of governors and representatives of the central banks of the COMESA countries, including Egypt, Djibouti, Sudan, Zimbabwe, Burundi, Uganda, Malawi, Zambia, and Eswatini, as well as the representative of the COMESA Secretary General and the director of the COMESA Monetary Institute.

In his opening speech, Hassan Abdullah, Governor of CBE, welcomed the participating delegations, expressing his happiness that Egypt hosted the meetings that are held in person for the first time after the outbreak of the Coronavirus pandemic.

Abdallah shed light on the challenges facing the world in general and the COMESA region in particular, from the repercussions of the Coronavirus to climate change, and the Russian-Ukrainian crisis. He explained that central banks exert the greatest part of the efforts to rescue economies from recession and ensure economic recovery and sustainable growth, with protecting lower income groups in society.

The governors reviewed a report on the economic performance of COMESA countries, with regard to the criteria of economic convergence in force in the region, as well as approving the publication of the first report on financial stability in the COMESA countries (FSR), which was prepared by a specialized working group comprising a number of member central banks in the region headed by the CBE.

The meeting also witnessed the adoption of a number of reports related to workshops and training programs held by the COMESA Monetary Institute, including a report on a training program hosted by the CBE, in cooperation with the Institute during September 2022 on the challenges facing COMESA central banks in the field of oversight and supervision.

The Governor of the Reserve Bank of Zimbabwe was announced as chairperson of the Office of the COMESA Committee of Central Bank Governors for 2023, and some items of the work plan for 2023 were discussed. They stated that the CBE, in cooperation with the Monetary Institute of COMESA, will host a number of training programmes in the areas of governance, supervision, financial stability, and financial technology.