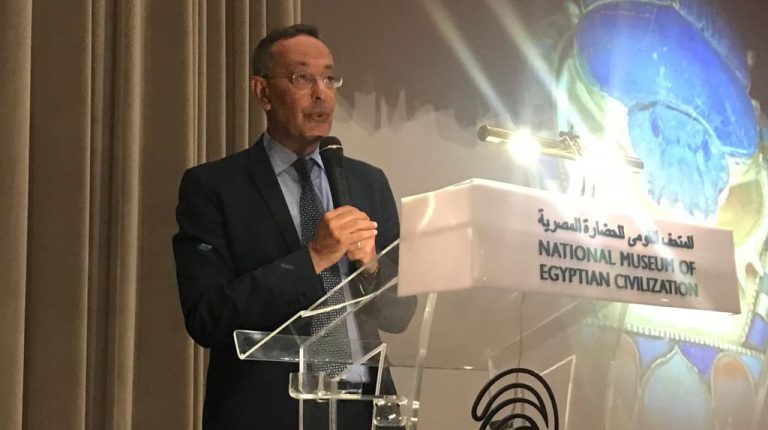 The National Museum of Egyptian Civilization (NMEC) in Fustat organized a celebration marking the 100th anniversary of the discovery of the tomb of king Tutankhamun in cooperation with the Italian Embassy in Cairo.

CEO of the Museum Authority Ahmed Ghoneim and Italy’s Ambassador in Cairo Michele Quaroni began the celebration by giving a speech in which they welcomed the guests which included Minister of Supply and Internal Trade Ali Al-Moselhi, former minister of antiquities Zahi Hawass, former director of the Library of Alexandria Mostafa El-Feki, a number of ambassadors of foreign and Arab countries in Cairo, a group of higher authorities, and a number of researchers and those interested in the field of archaeological work.

The celebration included the screening of a documentary film titled: ‘Tutankhamun… The Last Exhibition,’ which tells the story of the discovery of King Tutankhamun’s tomb in November 1922 and the world’s fascination with this great discovery, and the preparations for the launch of the temporary exhibition of some of his possessions in an international exhibition in Los Angeles in 2018.

After the film ended, Hawass explained Egyptians’ role in discovering the tomb and all matters related to this important discovery.

The celebration also included an exhibition of photographs under the title ‘Novels We Didn’t Witness: The Tomb of Tutankhamun,’ which displayed a group of rare photos that are related to the story of the discovery of the tomb between 1922 and 1930, and the role of the Egyptians in this unique archaeological discovery, in addition to displaying content for scenes from the tomb and its treasures on the main screens of the museum located at the entrance to the Hall of the Royal Mummies.