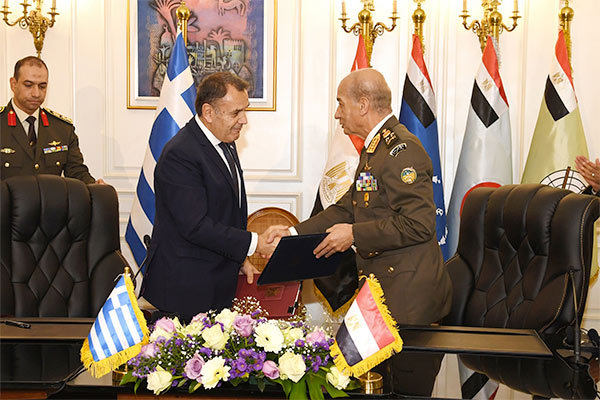 Lieutenant-General Mohamed Zaki — Commander-in-Chief of the Armed Forces and Minister of Defence and Military Production — and his Greek counterpart Nikolaos Panayiotopoulos signed a memorandum of understanding (MoU) in the field of air and sea search and rescue between the Egyptian and Greek sides.

The signing ceremony was held on Wednesday in the presence of Minister of Foreign Affairs Sameh Shoukry and his Greek counterpart Nikos Dendias.

The MoU comes as part of the partnership and cooperation between the two governments and stipulates providing all aspects of support between the two sides in order to achieve integration in the field of air and sea search and rescue.

Zaki expressed his pride in the partnership relations between the Egyptian and Greek Armed Forces in various military fields.

He also stressed the keenness of the general command of the Armed Forces to increase cooperation in various military fields.

For his part, the Greek defence minister expressed his full appreciation for Egypt’s active role in its regional and international environment, hoping that the next stage will witness the support of new horizons in the areas of military cooperation between both countries.

The ceremony was followed by a meeting between both sides in which they discussed a number of topics of mutual interest within the framework of strengthening the fields of military cooperation and the transfer and exchange of experiences between the Egyptian and Greek Armed Forces.