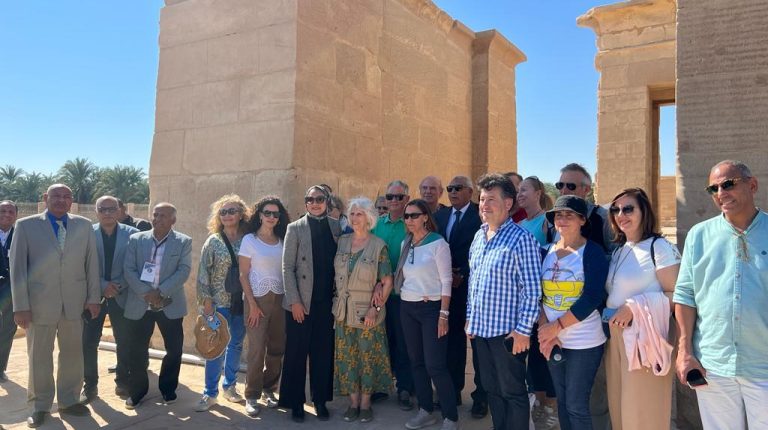 New Valley – A Spanish delegation consisting of 14 doctors in different specializations visited on Sunday New Valley governorate to explore its potentials in health tourism, sending a message to the whole world that the desert tourism and Egypt in general is safe.

The visit comes within the framework of efforts to promote medical tourism as the most prominent type of tourism that characterizes the governorate with its natural and environmental components, which qualify it for global competition among the most famous tourist destinations in this field.

The delegation were accompanied by New Valley Governor Mohamed El-Zamalout; Deputy Minister of Tourism and Antiquities for Tourism Affairs Ghada Shalaby; Essam Al-Qadi, Vice chairperson of Safari Egypt; Amr Sedky, former chairperson of the tourism committee in the House of Representatives; Hany Mostafa, Vice President of the Universal Health Insurance Authority; several representatives from the Ministry of Tourism, the Egyptian Tourism Promotion Board (ETPB), and the governorate; several presidents of Egyptian universities; and businessmen.

The delegation started their visit by inspecting a project for the production of natural silk and agricultural greenhouses, praising the initiatives of land reclamation and expansion of the agricultural area.

Then they visited the tombs of Al-Bajwat and the Temple of Hibis, which is the only remaining Egyptian temple from the Persian Sawi era, and includes archaeological monuments representing the different historical eras, Pharaonic, Persian, Ptolemaic, and Roman.

On the sidelines of the Spanish delegation visit the governorate in cooperation with the Ministry of Tourism and Antiquities held a conference of marketing and promoting Health tourism in New Valley.

The conference discussed the most important natural assets that the governorate enjoys, which made it a distinguished destination for health tourism. Visions were also presented for the advancement of this sector. A number of pioneering experiences in the field of treating skin diseases and psoriasis with natural herbs, which the governorate is distinguished for cultivating, were reviewed.

Deputy Minister of Tourism and Antiquities for Tourism Affairs Ghada Shalaby, said medical tourism in desert areas is one of the interests of the Ministry of Tourism and Antiquities. Egypt is rich in many natural and archaeological elements that include tangible or intangible human heritage represented in antiquities and natural features such as plants that Egypt is interested in preserving and promoting to other countries.

She added that the visit aims to introduce the Spanish delegation interested in Egyptian culture to a new tourist area, the New Valley, to be added to the list of tourist destinations in Luxor, Aswan, or Cairo.

“Despite the effects of the Coronavirus pandemic, which affected tourist destinations all over the world, Egypt emerged from this crisis and resumed tourism, because it adhered to strong controls that take into account health and safety standards, and therefore we expect a rich tourist season. Spanish tourism flourished in Egypt in summer and winter alike,” the Deputy Minister of Tourism and Antiquities for Tourism Affairs said.

She directed her speech to the Spanish delegation, expressing her aspiration to learn about their vision of natural products in the New Valley and how to invest and promote them in the aspects of natural treatment.

During his speech, Essam Al-Qadi, Deputy Chairperson of Safari Egypt, said: We have been working on the medical tourism file for many years.

He pointed out that the New Valley is “a charming spot in the land of Egypt,” and its components can be invested in all kinds of health tourism, whether medical tourism, recreational tourism or facilitating (accessible)  tourism.

Al-Qadi noted that elderly people from European countries who suffer from severe cold and difficult climatic conditions can be invited to visit and reside in the place, and then health care can be provided for them, and tourist trips can be organized for them in all places of Egypt.

“I hope to start a very big project in complementary and experimental medicine that will not only help in providing treatment but also in  preparing medical personnel, in cooperation with the Spanish side, to receive many patients from all over Europe to benefit from this beautiful place,” he concluded.