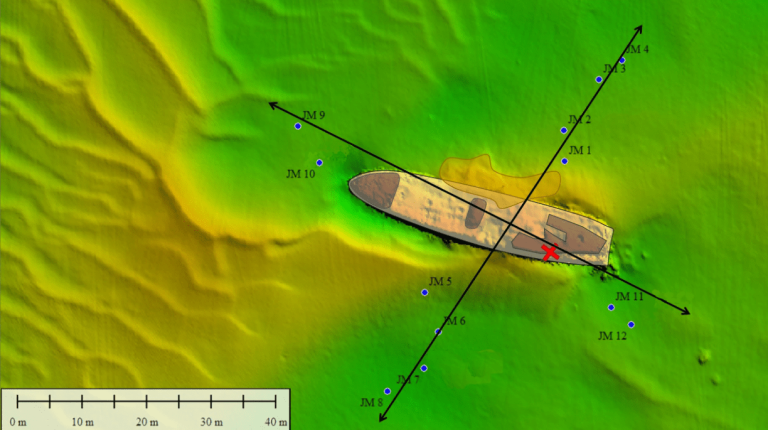 Researchers have discovered that the wreck of an 80-year-old historic shipwrecked during World War II continues to affect the microbiology and geochemistry of the ocean floor in the area where the wreck is settled.

This indicates the need to remove wartime shipwrecks from the seabed.

According to the study, published on 18 October in Frontiers in Marine Science, researchers show how the debris leaks dangerous chemical contaminants, such as explosives and heavy metals, into ocean-floor sediments in the North Sea, affecting marine microorganisms around it.

The North Sea is littered with thousands of wrecks of ships, planes, tools of war and millions of tonnes of conventional munitions such as shells and bombs. Shipwrecks contain hazardous materials (such as petroleum and explosives) that may harm the marine environment. However, there is a lack of information about the location of the shipwrecks and their impact on the environment.

The V-1302 John Mahn was a fishing vessel captured by the German Navy during World War II and sunk by British bombers in 1942. It has been resting 30 meters below sea level in the Belgian North Sea ever since.

In the new study, Josefien Van Landuyt, a PhD candidate at the Center for Microbial Ecology and Technology at Ghent University in Belgium, and colleagues analysed samples taken from the hull of the steel boat and the ocean floor. They found traces of arsenic, explosives, and heavy metals such as nickel and copper. The team also found polycyclic aromatic hydrocarbons, a group of chemicals that are naturally found in fossil fuels.

Van Landuyt said the team observed low concentrations of polycyclic aromatic compounds, munition compounds and heavy metals, and that there was a tendency for these compounds to increase in samples closer to the shipwreck’s coal deposit.

She added: “We have seen small changes in the microbial community, with aromatic degrading materials being enriched in these sediment samples as well. This indicates that debris may have leaked or is still leaking some of these compounds into marine sediments. However, these concentrations are very low. “.

These chemicals remodel the microbiome in the immediate vicinity of the vessel, with microbes known to irritate PAHs. According to the researcher, the pollution levels from the V-1302 John Mahn are relatively low, allowing the wreck to serve as an artificial reef and a nursery for fish.

Although the level of pollution is limited, the researcher warns that thousands of other wrecked ships and planes from that period may leak larger quantities of toxic substances into the North Sea. There are ships that little is known about their whereabouts at the bottom of the sea or what they were carrying on board, especially since some of these ships were bombed while they are still full of ammunition.

It is estimated that World War I and II shipwrecks around the world collectively contain between 2.5 million and 20.4 million tonnes of petroleum products.

Van Landuyt explained that this study is just the tip of the iceberg. “We examined only one ship, at one depth, in one location. To get a better overview of the overall impact of shipwrecks on the North Sea, a large number of wrecks must be sampled. Ships at different locations.