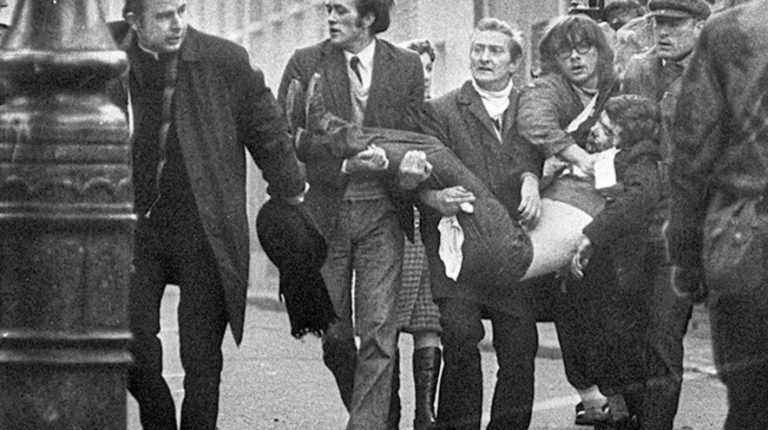 A Tik Tok video of five young men Irish dancing to “Another one bites the dust,” the famous song by British band Queen, in front of London’s Buckingham Palace has about a million views on Twitter. It was posted the day of Queen Elizabeth II’s death.

Celebrating a death is insensitive. The celebrations to honour the Queen who for countless people is a symbol of brutal colonisation and its institutions are also insensitive, many have argued reasonably this past week.

Heavy is the head that wears the crown. When that crown’s jewels are the spoils of war from so many of the world’s countries, legions will not feel obliged to show respect for the dead.

Bearing the burden of the enduring social trauma from the barbarity of colonisation, the Queen’s death would indeed trigger an eruption of anger in a diversity of societies. That so little of the past has ever been acknowledged only makes matters worse.

“To those with thoughts about ‘respecting the dead’: In 1972, British soldiers shot 26 unarmed civilians during an anti-colonial protest march in Derry, Ireland. Fourteen people died on Bloody Sunday. All during #QueenElizabeth’s reign.” The tweet included the image above of Jackie Duddy’s bloody, lifeless body being carried by several men. He was the first fatality on Bloody Sunday.

Since the Queen’s death on September 8, the hashtags #IrishTwitter, #BlackTwitter, and #BrownTwitter are trending on social media.

The Economic Freedom Fighters (EFF), a South African opposition party, September 8 Twitter statement expresses their feelings about the Queen’s death and the ills they hold her responsible for in South Africa and elsewhere.

Signs of social trauma and its persevering impact on the generations of today are pervasive in the EFF statement. It also highlights the importance of social acknowledgement in trauma.

“Elizabeth ascended to the throne in 1952, reigning for 70 years as a head of an institution built up, sustained, and living off a brutal legacy of dehumanisation of millions of people across the world.”

“We do not mourn the death of Elizabeth, because to us her death is a reminder of a very tragic period in this country and Africa’s history. Britain, under the leadership of the royal family, took over control of this territory that would become South Africa…”

“From that moment onwards, native people of this land have never known peace, nor have they ever enjoyed the fruits of the riches of this land, riches which were and still are utilised for the enrichment of the British royal family…”

“…[O]ur interaction with Britain under the leadership of the British royal family has been one of pain and suffering, of death and dispossession, and of the dehumanisation of the African people.”

“Elizabeth Windsor, during her lifetime, never acknowledged these crimes that Britain and her family in particular perpetrated across the world.”

“She willingly benefited from the wealth that was attained from the exploitation and murder of millions of people across the world.”

“If there is really life and justice after death, may Elizabeth and her ancestors get what they deserve.”

Actions and atrocities sanctioned by the British royal family in Zimbabwe, Zambia, Kenya, the Caribbean Islands, India, Bengal, Australia, and Yemen are among the EFF’s accusations.

The Queen’s direct involvement in the building of concentration camps to suppress the Mau Mau rebellion against the colonial administration in Kenya in 1957 and ordering the suppression of the uprising in Yemen in 1963 are also among the accusations.

The EFF statement does not represent others, but I do think it reflects the roar of anger that is now being expressed. The widespread articulation of pain, suffering, and losses of all kinds after the Queen’s death speaks to the far-reaching social trauma of colonisation that burdens generations of today.

The large burden of disease across generations of Holocaust survivors prompted the initial investigation into the effect of a large historical event on multiple generations.

Since, the enduring legacies of the social traumas of the Holocaust, African-American slavery, the Native American “vanishing” genocide, the Armenian genocide, and the Rwandan genocide for individuals and societies have all been studied.

Social trauma results when a social group is the target of planned persecution by organized societal violence or genocide. The psychological well-being and relationships of individuals suffer, and the social environment is afflicted too.

Trauma is always transmitted across generations with social trauma, but not necessarily so with individual cases.

Social trauma integrates the historical circumstances of the original traumatic event and the historical, sociological, political, and cultural conditions that perpetuate it into the clinical understanding of trauma and how it is transmitted through generations.

Biologically, it is believed that social trauma is passed down to new generations through the body’s natural stress processes. This happens through a modification in the expression of genetic information at a molecular level without a change to the DNA sequence.

Evidence of this mechanism has been identified in Holocaust and Rwandan genocide survivors and their children.

Developmentally, trauma is passed down through the way babies and children first learn how to relate to others, attachment. This is especially true with social trauma.

Violence undermines the intrinsic way humans feel safe. Untreated traumatic psychological wounds directly affect a caregiver’s capacity to be consistent and engaged. Consequently, this triggers an alarm in a child without any link to an actual fearful event. It then creates a new traumatising dynamic between the child and the caregiver.

Without a foundational secure attachment, there is an interference with trust and relationships, which has consequences for social and professional interactions across the entire life span. These cycles repeat generationally until interventions disrupt the cycles.

Without memory of or participation in the original event, fear, anxiety, anger, and violent behaviour pass on from generation to generation, as does strength, resourcefulness, and resiliency. Although, when traumatic events are acknowledged, people suffer less and the generational cycle has less fuel.

Through social trauma the original event leaves a lasting imprint and becomes embedded in the social environment, impacting the survivors, their coping mechanisms, and their recounting of the initial trauma. All of this gets passed down through generations.

Personally, I feel affected by the explosion of anger since the Queen Elizabeth’s death. Many of the societies bubbling with emotion are places I have lived, worked, or travelled to.

As jarring as the EFF statement is, the emotions people are expressing are very real.

I asked a politician from South Africa, a place I once called home, about the widespread anger after the Queen’s death. She said, “Never did I think so many in the world would bluntly put their feelings out there, without fear or favour.”

As distasteful or mistimed as it seems to some, Queen Elizabeth’s death has triggered a great deal of anger in many societies of the world.

Social trauma describes the reverberation of persecution of a group on the group keeping individuals and societies in a continuing cycle for generations. The dehumanising aspects haunt generations as the ghosts of the past are inherited.

Social acknowledgement of any trauma is important for healing, but it may never come from the source of a trauma. It can at least come from the people and societies experiencing the repercussions. And to me, healing and the expression of real emotions is a good thing.

* Dr Iris Boutros is a behavioural and development economist and strategist. She writes about employment, enterprise development, inclusion, and economic growth. Her work currently focuses on gains and value from connecting behaviour, the brain, and the body.