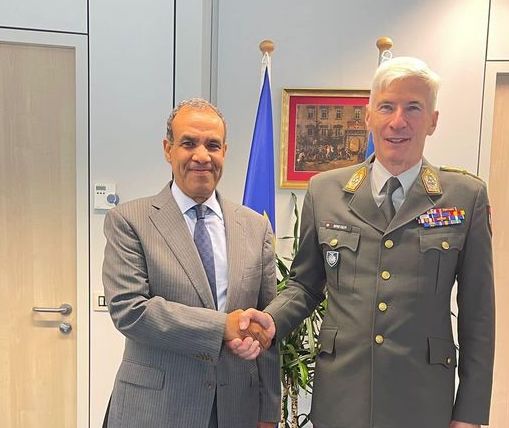 Egypt’s Ambassador in Brussels and the EU Badr Abdel Aati met with Permanent Chairperson of the EU Military Committee Robert Brieger on Tuesday to discuss issues of mutual concern.

The meeting touched on the existing cooperation between Egypt and the EU and the significant progress in relations on all political, strategic, economic, financial, scientific, and cultural levels.

This is especially in light of President Abdel Fattah Al-Sisi’s visit to Brussels last February, followed by the visit of the president of the European Commission to Cairo on June 15 and the subsequent convening of the Council of Participation between Egypt and the EU in Luxembourg recently.

The two officials also exchanged views on the repercussions of the war in Ukraine on the world economy, especially with regard to global food security, and ways to confront these repercussions in light of the fact that Egypt is one of the countries most affected by this crisis.

Furthermore, the meeting dealt with a number of regional and international issues of interest to both sides, foremost of which was combating terrorism and Egypt’s major achievements in this regard.

Abdel Aati reviewed his country’s efforts to counter terrorist and extremist ideology and elements of Egypt’s comprehensive approach to combating terrorism, focusing on the economic, social, and security dimensions, and referring to the joint Egyptian-European presidency of the Global Counterterrorism Forum.

They also discussed combating illegal migration and the great progress achieved by Egypt in this regard, as well as the situation in the Sahel and the Horn of Africa in light of their great importance for both sides.

For his part, Brieger expressed his appreciation for the pivotal role played by Egypt in ensuring the security and stability of the Middle East and Africa, stressing the EU’s interest in further developing its cooperative relations with partners in the southern Mediterranean in the areas of training and capacity building.