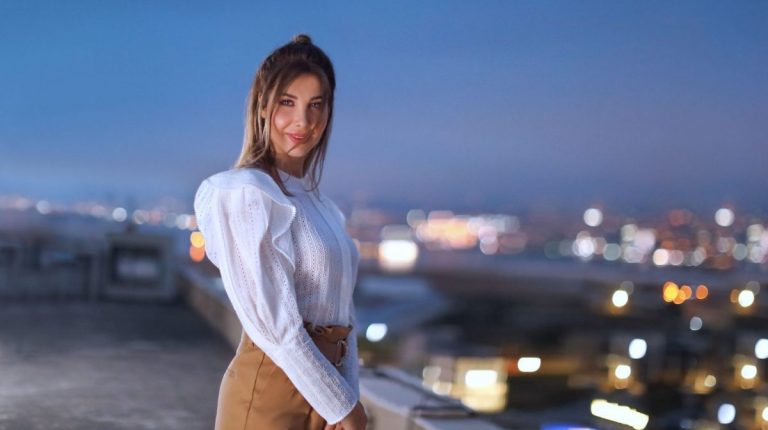 Success begets more success, however, Nancy Ajram’s illustrious achievements gave her great confidence in herself, which is evident in her comments that were characterised by wisdom and intelligence.

Her latest song achieved great success; however, she is gearing up to release a new song in the Egyptian dialect called ‘Sahsah’ (‘Wake up’), which we discussed in an interview with her.

When you started singing, did you expect all this success?

I started at a very young age, but the audience only knew me through music videos, especially the one for ‘Akhasmak? Ah!’

I think that having a music video is recipe for the success of many singers, since it is good publicity for them. As for my quick rise to success, I was frankly confident of my success, and I did not want anyone to accuse me of being arrogant, however, I did not expect it to be this great, especially in Egypt, where it was beyond description.

This confirms that the Egyptian people can receive beautiful art and encourage artists who respect their work. After the audience came to know and love me, I became very afraid of this love, and I was afraid that I would let them down one day.

So, I was keen to renew my songs and present a beautiful form, sometimes in the dialect of the Egyptian people, which I and all Arab singers adore. But this does not mean that I encourage the Egyptian dialect only, but I like to sing in most of the Arabic dialects to speak to all our Arab brethren and get closer to them.

Does this mean that you are keen to present diverse set of songs in the Egyptian, Gulf, and Lebanese dialects to satisfy all tastes and win new audiences?

An Arab singer should get close to all tastes and all peoples, because Arabs are linked by language, thought, and belief; and in the end, it is an important experience, because I love presenting all lyrical colours, and I love the Egyptian dialect very much.

But this does not prevent me from singing in the Lebanese dialect on the basis that I am Lebanese. And if you ask me about the colour that I like in my songs, I will tell you that diversity is an important factor for me, because people like to hear everything from the artist, and I want to satisfy all tastes and speak to everyone in their dialects so that I can have a special place in their hearts.

I also noticed that everyone sings in the dialect of their country besides the Egyptian dialect, and I wanted to be distinguished and present more than one Arabic dialect, and I can say that I have succeeded in delivering that sort of thing.

How do you see the success of your latest song ‘You don’t apologize’?

Praise be to God, the music video achieved great success and brining in millions of views and listeners, which made me very happy and motivated me to release and shoot new songs.

I am grateful to my large audience for this support, which has made me happy. A few days ago, I finished filming a video clip for ‘I want someone to love’, which is written by Ahmed Mady and composed by Ziad Barji, and is the fourth song that I filmed from my last album, ‘Nancy 10’.

We heard that you’re getting ready to release a new song in the Egyptian dialect. Is that true?

Indeed, I recently finished recording and filming a beautiful Egyptian song titled Sahsah that was produced by international DJ Marshmello and the distinguished Tarek Madkour.

The music video is scheduled to release in July, and Marshmello will appear with me in many scenes. 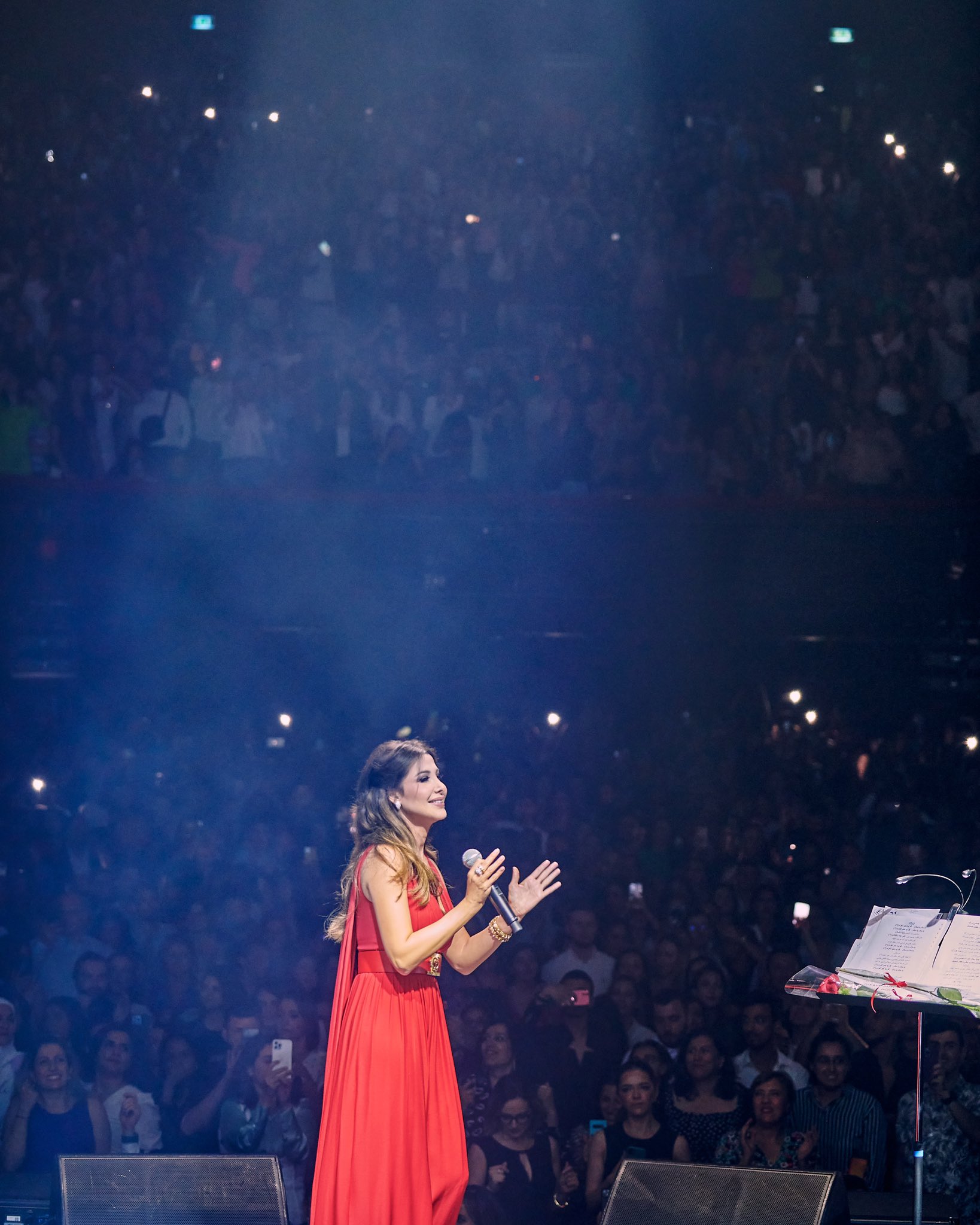 Have singles become widespread the world of music?

Singles gain popularity faster than an album does. Look around you and you will find that the cassette market has changed dramatically. Things have become completely different, and there are less production companies now.

Once a song is released, you can find it on the internet, and therefore the situation now requires a different strategy.

Singles have become a fad because it keeps the artist in the minds of their fans constantly.

Making singles requires a smaller budget and is better for an artist than being absent from the scene for a long time until they finish an album.

However, if an artist is able to record and release a full lyrical album, this is a good thing, and this is what I am keen on constantly, as you’ll find me releasing singles while preparing a full lyrical album. My last album was Nancy 10 and thank God it achieved great success that made me very happy.

What about your new album? Will it see the light soon?

I have started prepping for my new album, and I’m still in the initial selection stage.

For your knowledge, when I start prepping for any new artwork, I’m usually in a good psychological state, and this time, I’m feeling really good, so I promise that the album will include many wonderful songs and the audience will like it very much.

The album will include many new details and surprises and cover many new ideas and topics.

When I write my songs, I care a lot about choosing expressive words and musical melodies with appropriate rhythms.

This is in addition to my permanent participation in concerts, the last of which was my huge concert in Cairo recently, and it was a joyful night that captured my heart and created unforgettable memories, and after that my concert at the famous Olympia Theatre in Paris.

Why the delay in releasing the album?

I study what I do well. I do not want to present an album just to be present every year, but I think that I have to slow down and think about presenting an art that is an addition to my career.

Don’t you think that 10 songs are too much?

I think that the audience that waited for me for so long deserve much more than that, and I present all these songs with complete satisfaction and love.

Why are you keen to present a song with a Gulf dialect in every album?

I adore the Khaleeji dialect, and I think that we have to offer it a lot, because it has a special kind of success. Khaleeji songs are among the most beautiful songs that I adore and love so much.

What do you say to those who tried to confirm that you are a star for a specific stage and just a phenomenon?

I cannot tell them anything because my work speaks for itself, and my continuous success confirms that I am not a phenomenon or a trend, and I am keen that this impression does not settle in my audience, and therefore I am looking for ways to develop.

The biggest proof of my success is that other female singers have tried to imitate me, but there is only one Nancy, and renewal and development is the basis for continuity.

Do you think that having an exclusivity deal is beneficial to an artist or not? Do you agree with that?

An exclusivity deal may provide an artist with a chance to innovate and set trends, but there are exclusivity contracts that are negative for the artist in the sense that the benefit goes to the company only, and it controls the artist according to its desire, which I don’t condone.

But if a deal will provide me with what serves me, then I have no objection. The important thing is that it is in my interest and serves my art and introduces me to all television and satellite channels, because I belong to the Arab public, which I have I signed a contract with.

I’m very happy to be at the disposal of the public. And this is the only contract that adds to me and does not take away from me, and I give it everything I own with comfort, happiness, and reassurance that I am on the right path.

Is it true that you are seriously considering an acting experience?

Several producers gave me several offers, including roles in films and TV series in Egypt and Lebanon, but I turned them down despite their quality because I am currently focused on singing, and therefore the idea of ​​entering the world of acting is an idea that is postponed until I am fully prepared for it.

I promise my fans that I will give them art good that will preserve the image that they are accustomed to. I frankly fear a lot for my image and my appearance in front of my audience who love me.

I may find a script that forces me to act without even thinking, but this will not be at this stage, but I am waiting for the right time to become an actress.

There’s always a lot of rumours surrounding you, which of them have affected you?

All of them bothered me and certainly affected me because they are ridiculous and trivial rumours, created by the imagination of some psychopaths who do not like anyone to succeed and seek to demolish any successful person.

Is it possible for me to get married to a different person every day or that I am in a rumoured secret relationship!? Thank God that the truth emerges quickly. Rumours usually die as quickly as they appear because they are not true.

Do you feel anxious and stressed after releasing an album?

Of course, I feel very anxious and stressed out. I am terrified and only sleep for two hours a day. Sometimes I wake up from my sleep frightened and quickly run to listen to the last song I recorded, and then I listen to it day and night to evaluate the work.

It’s usually an anxious time because of my desire to offer people the best possible final product. Anxiety and fear are healthy feelings in the right doses, and whomever is not afraid before writing an exam is not really ready for it.