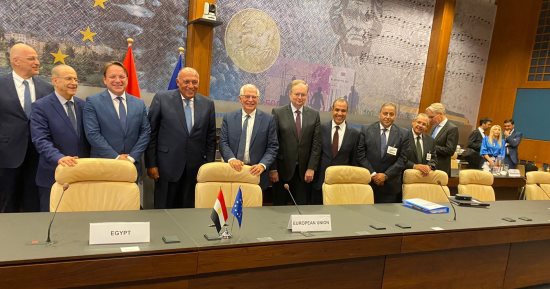 The European Union )EU( has agreed to support Egypt with €240m until 2024, devoted to the areas of green and sustainable development, human development, economic resilience, and green and digital transformation, and social cohesion.

The EU said in a joint statement after the ninth meeting of the EU-Egypt Association Council that it will support the multi-year indicative programme and the implementation of the pilot initiatives of the Economic and Investment Plan.

The EU said it will work together with Egypt to enhance economic competitiveness and promote private sector development in urban and rural areas. Particular emphasis will be placed on promoting the empowerment of women and the role of women and youth in society and the economy.

The two sides reaffirmed their commitment to work together on mitigation and adaptation to climate change, including sustainable resource management, with a particular focus on water management, sustainable agriculture development and expansion of public transport networks.

The EU confirmed its support for the Egyptian presidency of COP27 to ensure the success of the conference.

The two sides agreed to deepen their political dialog on human rights. The EU and Egypt agreed that civil society and the private sector were important and effective contributors to the implementation of participation priorities and were able to support the ongoing sustainable development process in Egypt.

The two sides welcomed their upcoming joint chairmanship of the Global Counter-Terrorism Forum starting in March 2023 and reaffirmed their commitment to addressing the root causes of terrorism with full respect for human rights and fundamental freedoms, in order to successfully combat and prevent militancy and promote economic and social development.

The EU and Egypt affirmed their commitment to cooperate in the fight against violent extremism leading to terrorism and any form of discrimination, including Islamophobia, racism and xenophobia.

The European Union and Egypt expressed concern about the impact of the war on increasing global food insecurity, as well as on global supply chains and rising prices for energy and commodities.

The European Union announced that it will support Egypt’s efforts to improve grain production and storage facilities by 100 million euros through the Regional Food and Resilience Facility (RSAF) to provide partial assistance to cope with the consequences of rising food and commodity prices.

The EU and Egypt also exchanged views on the Middle East peace process, Libya, Syria, the Horn of Africa and the Grand Ethiopian Renaissance Dam (GERD), among others.

The EU recognizes Egypt’s central role in supporting peace and security in the Middle East and Africa.

The two sides stressed that the only way to a just, sustainable and comprehensive solution to the Palestinian-Israeli conflict is a two-state solution that ends the occupation and leads to the establishment of an independent, contiguous, sovereign and viable Palestinian state in accordance with the 4 June 1967 borders with East Jerusalem as its capital.

They stressed the need to re-launch serious and meaningful negotiations to achieve the two-state solution and restore confidence in the Middle East peace process. They condemned the construction and expansion of settlements, the confiscation of land and the forcible expulsion of Palestinians from their homes as illegal actions in accordance with international law that undermine the viability of the two States and the chances for peace.

“The EU also welcomed Egypt’s efforts to become an energy hub in the region, with a focus on renewable energy, ongoing cooperation within the framework of the Eastern Mediterranean Gas Forum, and mutually beneficial energy projects including Egypt-EU linkage projects.”

The European Union and Egypt welcomed the Security Council Presidential Statement on the GERD, issued on 15 September 2021 on reaching an agreement acceptable to all parties and binding on the filling and operation of the dam.

The Union stressed the need to reach this agreement as soon as possible in order to protect Egypt’s water security and support peace and stability in the region as a whole.

The EU expressed its readiness to support the AU-led negotiations and to play a more active role, if this role is beneficial and desirable on the part of all parties, by making available the EU’s rich experience in managing shared water resources in accordance with international law.